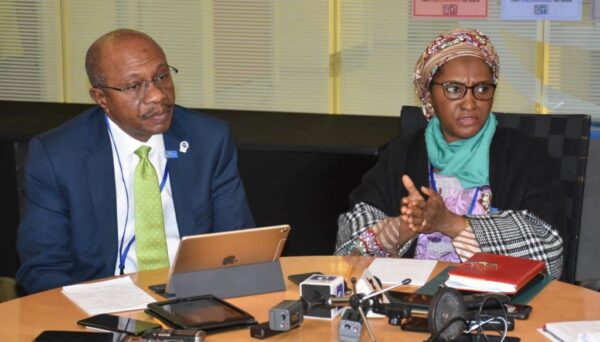 The Central Bank of Nigeria has opposed plans by MTN to charge their subscribers for Unstructured Supplementary Service Data access to banking services from October 21.
The Governor of the CBN, Godwin Emefiele, gave the bank’s position at a news briefing by the Nigerian delegation to the just-concluded World Bank/IMF Annual Meetings in Washington on Sunday.
The News Agency of Nigeria reports that MTN, in an SMS message to its subscribers, had said the decision was on the request of the banks and would take effect from October 21.
“Yello, as requested by your bank, from October 21, we will start charging you directly for USSD access to banking services. Please contact your bank for more info(rmation),” the message said.
Responding to a question seeking his reaction to the announcement, the CBN governor said the bank would not allow that to happen.
Emefiele said: “About five, four months ago, I held a meeting with some telecom companies as well as the leading banks in Nigeria at Central Bank, Lagos.
“At that time, we came to a conclusion that the use of USSD is a sunk cost.
“What we mean by a sunk cost is that it is not an additional cost on the infrastructure of the telecom company.
“But the telecom companies disagreed with us.
“They said it is an additional investment on infrastructure and for that reason they needed to impose it.
“I have told the banks that we will not allow this to happen.
“The banks are the people who give this business to the telecom companies and I leave the banks and the telecom companies to engage.
“I have told the banks that they have to move their business, move their traffic to a telecom company that is ready to provide it at the lowest possible, if not zero cost.
“And that is where we stand, and we must achieve it.”
NAN reports that the transactions to be affected by the charges include intra- and inter-bank money transfers, through USSD, among others.