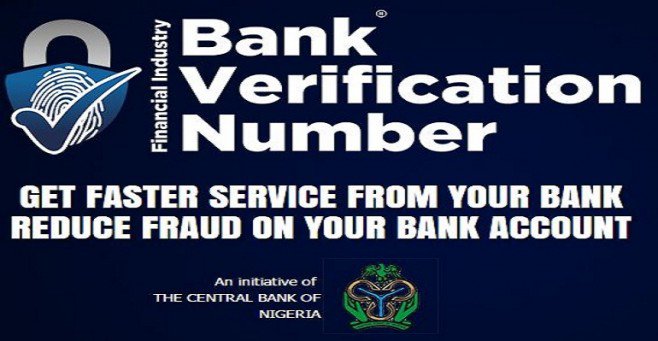 The Central Bank of Nigeria on Thursday said bank accounts without the Biometrics Verification Number would be operated as “No Customer Initiated Debit”.
The apex bank said this in a circular titled: “Classification on Accounts with BVN Related Issues.”
The circular was sent to all commercial banks and posted on its website.
The circular, signed by the Director of Banking and Payments System Department, Dipo Fatokun, said such accounts would remain dormant until the account holder obtains and attaches the BVN to the account.
The circular reads: “It has, however, come to our notice, that some customers could not link their BVN to their accounts.
“This is due to discrepancies between the record on the BVN database and the records on the core banking applications of the DMBs.
“Such customers can approach their bankers for correction, but some of the banks could not effect the corrections.”
The bank, in the circular, said in view of this development, it had become imperative for the CBN to issue the clarifications.
It said such clarifications included corrections of Date of Birth on the BVN record.
This should be allowed once, with supporting documents, evidencing the correct date of birth.
The CBN said change of names due to marriage should be allowed with supporting documents such as marriage certificate or affidavit among others.
The apex bank said minor correction of names due to misspelling should be allowed, with supporting documents such as international passport showing the correct name.
According to the CBN, change of names that are totally different should only be allowed after customer has produced supporting documents.
The CBN said this should be reported to the Nigerian Financial Intelligence Unit as a suspicious transaction by the bank customer.
The customers of the BVN database should be same in all his/her accounts, across the banking industry, the circular said.
On closure of accounts, the CBN said customers that wished to do so should be allowed.
It said in the statement: “Where the account is not linked with the BVN, a payment instrument should be issued in the name in which the account was opened.
“In case where the balance on the account is more than what is legally allowed on a paper instrument, the bank should seek for and obtain clearance from the EFCC.
“This should be done before the account can be closed and the balance transferred electronically to another account.”
The CBN, however, said where the bank is suspicious on the activity of its customer, such suspicious transaction should be filed with the NFIU.
It said the timeline for the resolution of BVN issues should be five working days from the time a customer submits all the required documents.
NAN.