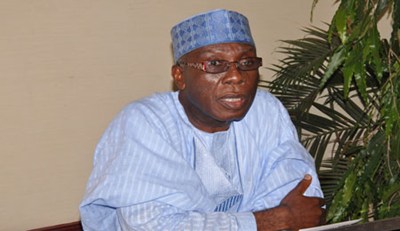 The Minister of Agriculture and Rural Development, Chief Audu Ogbeh, said the Central Bank of Nigeria had agreed to five per cent interest on lending rate to farmers in the country.
Ogbeh made this known on Tuesday while delivering a keynote address at the opening of a two-day national workshop on: “New Agricultural Policy for Nigeria.”
The workshop was organised by the National Agricultural Foundation of Nigeria in collaboration with the ministry and the All Farmers Association of Nigeria.
According to the minister, the agreement followed discussions with key officials of the apex bank on Tuesday morning.
Ogbeh said: “Just this morning, I had talks with key officials of the Central Bank of Nigeria to bring the lending rate to five per cent.
“How they do it, how the finance institutions want to cope with it, they have to or we impose severe penalty on anyone who defaults, otherwise we will not survive.
“There is no country on earth in or outside Africa where banks demand 25, 18 or even nine per cent interest rate for agriculture borrowing.
“With those rates, I assure you as a man who has been in this business – agriculture – since the age of seven years, you cannot make profit in agriculture.”
The minister said agriculture and solid minerals remain the alternatives sectors to which the country could diversify now to survive current economic situation.
He said: “The challenge before us is how to make this happen.
“The time for lamentation is over.
“The time for action is here.”
Ogbeh said unless this was done, the problem of youth unemployment and youth restiveness would continue to plague the country.
He said: “We have 100 million young people in the country who are below the age of 50 years and if we do not give them job, they are likely to take care of us in a very rough manner.”
Ogbeh said outbreak of bird flu and pastoralists/farmers clashes remained challenges to the sector, adding that in the last two months, flu had killed between five and six million birds.
He, however, disclosed that a vaccine had been found for the virus.
He said: “I have been calling friends across the globe.
“Just yesterday, I received a message from Egypt and they informed me that they have found a vaccine, which they injected the chickens with, which is working perfectly well.
“We will not immediately rush in and bring the vaccines.
“We will ask our research institutes to take a look and see if they can fit into our needs.
“Every January, we have this problem of avian flu.
“It has destroyed many farmers.
“We are looking forward to finding some resources to compensate them.
“We do not have enough money right now even to pay arrears of certain debts which were piled up before now, but we will do what we can.”
Earlier, Senator Abdullahi Adamu, the Chairman of the Senate Committee on Agriculture, suggested the creation of a forum where farmers and the ministry could regularly dialogue in formulating agriculture rebirth policies.
Adamu, also the chairman of NAFN, said this was necessary as farmers were the ones to really implement agriculture policies.
He said they needed to be brought on board for proper education on policy objectives and direction.
Adamu also suggested that there should be clear policy on the procurement and sale of fertilisers at the right time during farming season.
NAN.