Car stolen from a street in Canada tracked to Nigeria 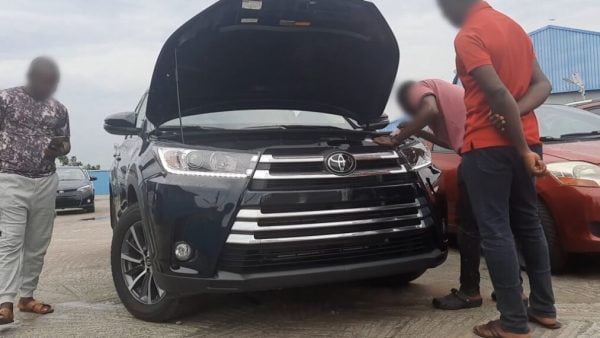 When Ahmad Abdallah’s SUV disappeared from his street last September, he thought he would never see it again.

He looked for clues in surveillance video of the thieves unlocking his 2017 Toyota Highlander and driving off in seconds, but concluded they were too well-organized, too well-resourced and too professional to be tracked.

More than six months later, CTV News Investigates was able to find his vehicle – sitting in a lot in a suburb of Lagos, Nigeria.

After seeing video of his own car for sale overseas, Abdallah realized how truly organized the criminals who stole his car may actually be.

“I got a call from you. You sent me a picture of my car. Oh it blew my mind,” he said in an interview. “This is clearly a big operation. There should be more people looking into it…we’re talking millions of dollars. This has to be taken seriously,” he said.

Abdallah’s experience is a small window into a huge surge in car thefts striking cities across Canada, with an apparent epicentre in the Greater Toronto Area.

Cars thought secure can now be broken into with simple tools, insurance representatives say, leading to criminal enterprises taking advantage of low-risk, high-profit opportunities to sell Canadian cars to markets in the Middle East and Africa.

Peel Regional Police say auto theft is up 63 per cent over last year. In Toronto, it’s up 59 per cent, with more than 2,000 cars stolen so far this year in the city.

Naveen Lochab’s 2016 Honda Pilot was stolen one night in February from his Brampton driveway, he told CTV News Toronto in an interview.

“They started the car and drove back and poof—disappeared,” he said. “I’m still in shock.”

Surveillance video of the incident shows two thieves walking up to his car in the middle of a snowstorm. Within 15 seconds they have unlocked the door. Within another minute, the car has started and they’re on their way.

Lochab couldn’t believe how easy it was. And when he asked around, he found out how common it was as well.

“Within this community I heard 57 vehicles had been stolen,” he said.

Michael Slack of Equite Association, an agency that seeks to clamp down on insurance fraud, said across the country he had seen a 24 per cent increase in reports of stolen vehicles, with about 4,000 so far taken in Ontario alone.

“It still continues to grow. A lot of that is there’s high profits with little risk associated with this. It’s not like criminal ventures like drug trafficking and weapons smuggling,” Slack said.

Police in the GTA have busted several crime rings, pulling stolen cars out of shipping containers seized on their way out of the country, including Peel Regional Police’s Project High Five, which recovered 200 stolen vehicles worth an estimated $11 million and resulted in 24 people charged.

All likely fuelled, Slack said, by profits overseas. A listing of a 2019 Lexus RX 350 – a commonly stolen vehicle in Canada – shows they sell for about $48,000 Canadian today. But in Nigeria on a used car listing site, it’s going for the equivalent of $79,000.

“There is an ever-expanding global market around the world for these vehicles to be sold, and there is an ease of smuggling the vehicles out of the country and to other continents,” Slack said.

A 2017 Toyota Highlander in Canada would be sold for about $44,000. Over in Nigeria, it’s offered for the equivalent of $55,000. Many listings show the identifying marks such as license plates or decals that make it clear the car is from Canada.

One of those Toyota Highlanders looked a lot like the car that was stolen from Abdallah in September. CTV News Investigates hired a team of Nigerian journalists to look into the situation.

The team arranged to meet the vendor in a gravel lot in Amuwo Odofon, just west of the Nigerian capital, Lagos, in mid-April. The seller met the group and brought them over to the Highlander to examine it.

He claimed the car was imported legally from the United States. But when the people posing as buyers asked to see the paperwork — he wouldn’t share it.

“Maybe he needs the [VIN] number,” said one of the buyers.

“No, the number we don’t want to release,” said the seller. “I can’t do anything to him. We are not going to release the number.

However other identifying marks, when seen up close, confirmed it – this was indeed Abdallah’s car. And in the same lot, there was another car with Quebec plates.

CTV News Investigates showed some of the pictures from Nigeria to Abdallah, who lives in Ottawa.

“That’s crazy,” he said. “The people they are targeting [have] family cars. They are people with children. People with regular jobs. Some people cannot take that hit.”

“You do the calculations, this is a major operation. This is no joke,” he said.

Abdallah said even though he did get a payout from his insurance for the car, he is still without the crucial tools for work that were inside it.

“All I saw was a gentleman standing in front of my car for 15-20 seconds, my car unlocked by itself, he got in, pushed the push to start button and drove off with it. It was unreal,” Abdallah said in an interview.

“It was a great loss. I ended up losing a lot of stuff, more than just the car, my tools, certain belongings that my insurance wouldn’t budge on.”

As for Lochab, CTV News Investigates could not find his stolen Honda Pilot. But he wants people to take steps to protect their cars so that it doesn’t happen to them.

“These newer vehicles are more vulnerable,” he said. “When I experience it firsthand, I want everyone to be a bit more vigilant about these activities.”

Car companies contacted about their security said they’re aware of the issue and are working on it.

And one insurance representative said that even in 2022, it may be a good idea to go back to a means to secure a car from decades ago – a wheel club.