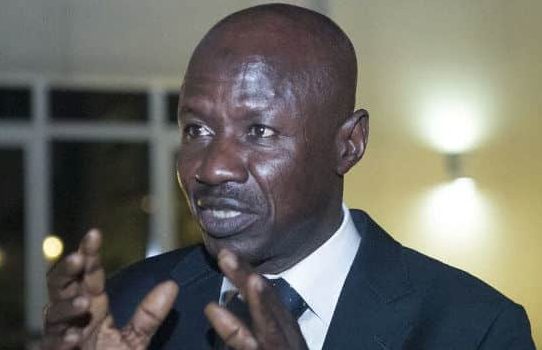 The Economic and Financial Crimes Commission says the Canadian Government has sought collaboration between it and the Royal Canadian Mounted Police on information exchange.
In a statement on Tuesday night, the spokesman of the EFCC, Wilson Uwujaren, said the Canadian High Commissioner to Nigeria, Christopher Thornley, delivered the request during a visit to the EFCC headquarters in Abuja.
Thornley was quoted as having said: “The Canadian government wants to better represent itself in the global fight against corruption via the EFCC platform.
“And this visit stems from the need to explore the possibility of opening a RCMP post in Nigeria.”
The envoy reportedly said the Canadian Government had liaison offices across the globe and would like to include the anti-graft agency.
The choice of EFCC, according to Thornley, was informed by the agency’s dogged fight against corruption that “has contributed to the drop in Nigeria’s corruption index”.
The EFCC Acting Chairman, Ibrahim Magu, expressed the commission’s willingness to collaborate with the Canadian Government to strengthen the fight against corruption.
Magu described the assignments of the RCMP and the EFCC as “very tough, overwhelming and challenging”.
“We are more poised more than before to surmount all challenges,” he said, recalling a request by EFCC to RCMP for technical support in 2012.
Magu added that the good working relationship between both agencies over the years had seen 15 EFCC officers sent to Canada on various trainings at the Canadian Police College in Ottawa.
The EFCC boss informed his guest that a draft Memorandum of Understanding between both agencies had been developed to fast track the process.
He said the draft would later be forwarded to the Ministry of Justice for approval.
The Canadian High Commissioner was accompanied by Eric Slinn, the RCMP Regional Manager; and Stephane Cadieux, RCMP Liaison Officer for West Africa.