Canada quarantines man with Ebola symptoms after travel to Nigeria 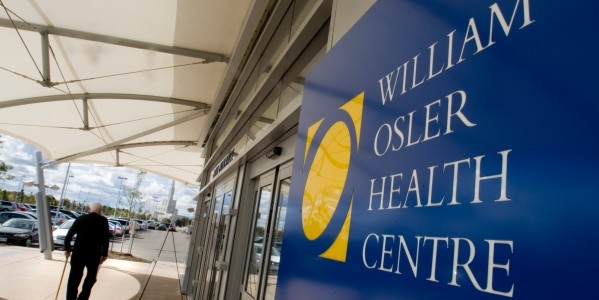 A hospital in Brampton, Ontario, has instituted heightened infection-control procedures after a patient who had recently visited Nigeria was brought in with fever and flu-like symptoms.
Nigeria is one of the countries affected by the largest and longest ever recorded Ebola outbreak in West Africa, which has killed at least 961 people since March, according to the World Health Organization.
The patient has been isolated at William Osler Health System’s Brampton Civic Hospital, which Peel Region health officials stress is purely precautionary given the patient’s travel history.
Dr. Eileen de Villa with Peel Public Health said the patient is showing a fever and other flu-like symptoms but cautioned there has been no diagnosis yet.
Nigeria on Friday declared a state of emergency because of Ebola.
“I am aware that we are currently testing a patient who recently travelled from West Africa. Initial signs and symptoms of Ebola are similar to many more common diseases,” Ontario Health Minister, Dr. Eric Hoskins, said in a release Friday night.
“One such disease relevant to African travel is malaria. There are currently no confirmed cases of Ebola in Ontario.”
Hoskins said he is in close contact with the chief medical officer of health and they are closely managing the situation.

Reassuring Canadians
Alison McGeer, a microbiologist and infectious disease consultant at Mount Sinai Hospital in Toronto, said that “although it feels odd,” seeing the precautions currently being taken at Brampton Civic should reassure Canadians.
“It’s unlikely that we’re going to see cases of Ebola virus that come to Canada,” McGreer told CBC News. “But it’s important that we are precautionary about it, that we have systems in place to detect people.
“And the people those systems are going to detect are people who’ve travelled, probably not even to high risk areas in those countries, but to those countries and who now have malaria or influenza or one of the many other diseases that can give you a fever.”

Risks
When two American aid workers who contracted the virus in Liberia were brought to Atlanta for treatment, it fuelled concerns about the possibility of Ebola arriving in North America. But public health officials have been reassuring Canadians that unlike viruses like SARS or even the flu, Ebola doesn’t spread easily through casual contact or the air. One can only become infected though direct contact with infected bodily fluids.
Even if a case were to come to Toronto or other Canadian cities, the risk of it spreading remains low in part due to the method by which it’s passed on and also because of Canada’s preparedness, according to Jason Tetro, a microbiologist and author of The Germ Code.
Tetro recently wrote the blog entry “Canada, Don’t Worry About Ebola” in the Huffington Post.
“I’m not concerned. I already know that Canada is prepared,” Tetro said. “In truth, we’ve led the world when it comes to being prepared for these types of outbreaks,” he added, referencing how public health officials reacted to an Ebola scare in March, when a Saskatchewan man returned from Liberia and later became ill.
Tetro said that the country’s readiness has a lot to do with the SARS Commission in 2003, which made a number of recommendations following the outbreak that year of severe acute respiratory syndrome. Those recommendations included asking two key questions of travellers coming back to Canada: “Where did you go, and what are you feeling right now?”
Hoskins also commented on Canada being adequately prepared Friday.
“From the beginning of the outbreak in West Africa we have taken steps to ensure our health system is prepared should a returning traveller be suspected of having the disease,” Hoskins said.
“With the experience and lessons learned from the SARS epidemic, our hospitals have sophisticated infection control systems and procedures to protect health providers, patients and all Ontarians, and are fully equipped to deal with any potential cases of Ebola.”
CBC News.