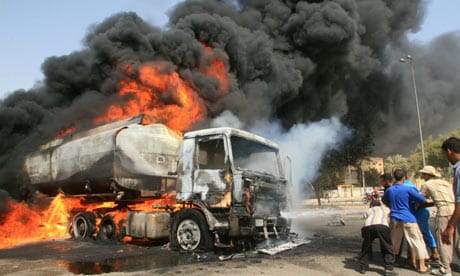 Share
Facebook Twitter LinkedIn Pinterest Email
The death toll of the fire outbreak that occurred at Linc Oil and Gas depot in Calabar, Cross River State on Sunday morning has increased to 11 from nine, the News Agency of Nigeria reports.
The state Commissioner of Police, Hafiz Inuwa, had on Sunday confirmed that nine persons died as a result of the inferno.
A visit by NAN to the University of Calabar Teaching Hospital on Monday showed that seven persons were currently receiving treatment at the intensive care unit of the hospital.
The Chief Medical Director of UCTH, Prof. Thomas Agan, told NAN that the hospital admitted nine persons shortly after the tragic incident.
Agan said: “We admitted nine patients. Seven of them in the burns ward and the other two who had severe threatening conditions were taken into the Intensive Care Unit.
“Unfortunately, those two gave up the ghost this morning. Right now, we have seven patients with burns in our custody and they are receiving treatment.
“We had to use all we had to ensure that they are kept alive. Our consumables are now exhausted.”
According to Agan, the cost of having patients with 60-90 degrees burns in the hospital was expensive.
He pleaded: “We need massive assistance, not only from the Federal Government, but from the Nigerian National Petroleum Corporation and all the facilities involved in this matter.”
One of the victims, Asuquo Okon, told NAN that he was looking up to God for survival and appealed for assistance from individuals and organisations.
When NAN correspondent visited the scene of the incidence, the two vehicles burnt to ashes during the explosion were yet to be evacuated.
The state Commissioner for Petroleum, Itaya Nyong, told NAN that the state would conduct a thorough investigation on the remote and immediate causes of the incident.
Nyong said: “We intends to embark on an investigation, and at the appropriate time, the machinery will be put in motion to assess the level of damage and establish culpability and certainly take action from there.”
calabar Cross River State Explosion Fire Hafiz Inuwa nan
Share. Facebook Twitter Pinterest LinkedIn Tumblr Email

Access Bank gets encomiums for support to health sector

NITDA lauded on training, empowerment of 50 IT journalists