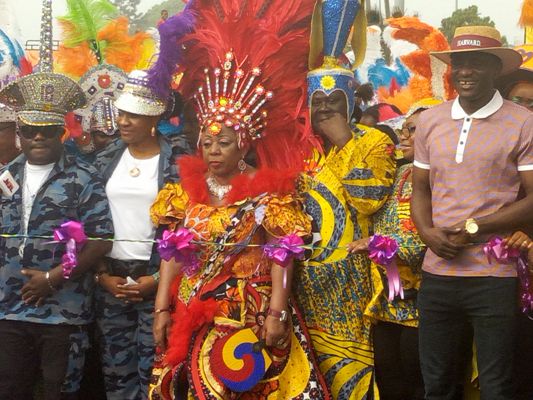 Share
Facebook Twitter LinkedIn Pinterest Email
Governor Ben Ayade of Cross River State has called on young Africans to shun illegal migration through the Sahara desert and the Mediterranean sea to Europe in search of greener pastures.
Ayade made the call on Thursday in Calabar at the grand finale of the 2017 Calabar carnival, which has the theme: “Migration.”
Ayade, who was colourfully dressed in a blue army camouflage, said it was time for youths across Africa to rise up to the challenge of contributing to the development of their countries rather than taking the risk of illegal migration.
He said the choice of the theme was to end illegal migration by creating awareness on the dangers of engaging in such act through difficult routes.
According to him, no country on earth is greener than Nigeria, adding that it is time for youths to engage in meaningful productive activities.
Ayade said: “Today in Calabar, we have people from the United States, Germany, Mexico, Sweden and others celebrating with us in this carnival; we want to tell them that Africa is so rich .
“Sometimes we begin to wonder why we have young Africans going through Morocco, Mediterranean Sea, Sahara desert and all the difficult routes to find themselves in Libya and being used as slaves and as sub-human beings.
“Today, we are here to tell a story in form of a drama and procession, a story of migration, the problem of Africa.
“Our young men and women take risk through perilous roads finding themselves in Europe and America in search of greener pasture.
“Today’s carnival is to tell the world that Africa is the richest continent.
“Africa is blessed, we have everything; and we have no reason, as a young man or woman struggling, to leave African continent.
“We are telling this story of pain, melancholy and frustration that indeed, the best place you can be is Africa.”
Ayade further said those in leadership position had a responsibility to reverse the trend, adding that the five carnival bands were designed to tell the story of migration to the world from the African perspective.
Earlier, Gabe Onah, the Chairman, Calabar Carnival Commission, said the programme, the largest street party in Africa, had come to stay.
Onah said the carnival was growing bigger and better with innovations added to it yearly.
Five carnival bands will dance round the 12km carnival routes on major streets in the metropolis.
Ben Ayade Calabar Carnival Cross River State
Share. Facebook Twitter Pinterest LinkedIn Tumblr Email