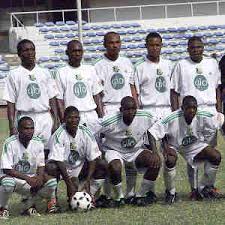 Nigeria’s champions, Plateau United, suffered a 4-2 loss to Etoile du Sahel of Tunisia in the first leg of first round of the CAF Champions League in Sousse on Tuesday.
The first round return leg match will be played in Jos, with the overall winners advancing to the group stage of the competition.
The North Africans were simply a different class from the NPFL champions, who pulled two goals back late on to give them a fighting chance in the second leg.
Amr Marey opened scoring for the home team after only just two minutes, before Amine Chemiti made it 2-0 two minutes later.
Chemiti then completed his brace after just eight minutes.
Aikhali Bangoura scored the Tunisians’ fourth goal, before Plateau United pulled a goal back via the penalty spot on 70 minutes through midfielder Raphael Ayagwa.
Plateau United scored a vital second goal on the road in the 82nd minute through Tosin Omoyele.