CAF beach soccer: My boys were too eager to score – Coach 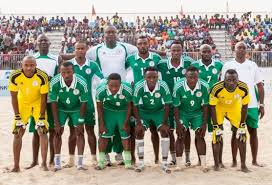 Share
Facebook Twitter LinkedIn Pinterest Email
Audu Ejo, the Sand Super Eagles Head Coach, on Wednesday said his squad’s eagerness to score gave them a slim 3-2 victory over Egypt at the ongoing CAF Beach Soccer Tournament.
In an interview with the News Agency of Nigeria in Lagos, Audu admitted that first matches were usually filled with tension.
Sand Eagles won their first match 3-2 against Egypt at the CAF Beach Soccer Tournament underway at the Eko Atlantic, Victoria Island, Lagos.
Ejo said: “My boys were eager to score, which is not totally a bad thing but that could only increase the tension, which is not good for any team.
“But for the tension, we would have scored more than three goals, nevertheless I am hopeful that we will keep getting better in each match.
“We will take each match as it comes.
“Another problem I noticed with my boys was that the first 10 minutes they weren’t playing according to instructions. I would attribute that to their eagerness to score.”
The coach said he had confidence in his players’ ability to qualify for the 2017 World Cup in the Bahamas.
He said: “The players have zeal to win, which is vital; our confidence will keep growing as the competition continues.
“We cannot underestimate the need for our fans to show us support like they have always done.”
NAN reports that Sand Eagles’ next match will be against Cote d’Ivoire and if Nigeria wins, the team would qualify for the semi-finals.
The winner and first runners-up of the ongoing competition would qualify for the World Cup FIFA Beach Soccer Tournament holding in the Bahamas from April 27 to May 7, 2017.
NAN reports that the Sand Super Eagles have won the CAF beach soccer tournament twice in 2007 and 2009.
NAN also reports that Madagascar won the 2015 edition of the Africa beach soccer tournament held in Lagos.