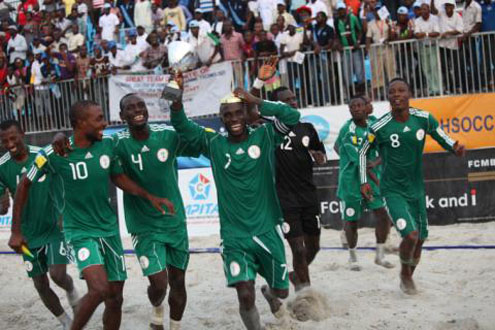 Share
Facebook Twitter LinkedIn Pinterest Email
The Super Sand Eagles on Thursday reached the semi-finals of the ongoing 2016 Africa Football Confederation Beach Soccer Africa Cup of Nations Tournament in Lagos having defeated their Ghanaian counterparts 4-3.
The breath-taking contest that would have marred Nigeria’s chances of aspiring to secure a ticket to the 2017 Beach Soccer World Cup had spectators on their seats edge.
To book the semi-finals ticket, Nigeria had won their Group A opening game against Egypt with a slim 3-2 victory and then lost to Cote d’Ivoire 1-3 on penalties after a 4-4 draw at regulation time.
Egypt lost all its group matches to Nigeria, Cote d’Ivoire and Ghana.
The Super Sand Eagles will take on Morocco in one of the semi-final matches on Saturday, while Egypt plays Senegal in the second.
The winners of the competition and the runners-up will represent Africa at the World Cup in the Bahamas.