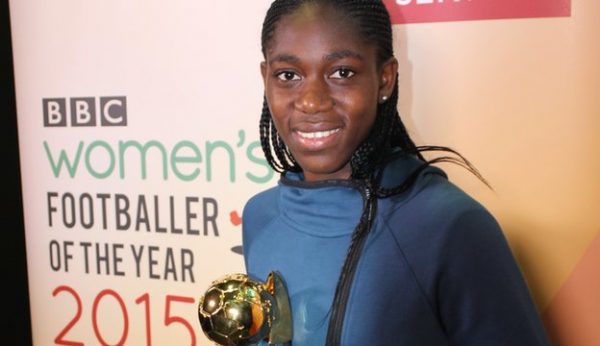 The President of the Nigeria Football Federation and FIFA Council Member, Amaju Melvin Pinnick, has congratulated Super Falcons forward, Asisat Oshoala, on her historic feat of becoming the African Woman Player of the Year for the fifth time.

The gangling forward achieved the feat at the CAF Awards ceremony that took place in Rabat, Morocco on Thursday.

Oshoala had a couple of years ago become only the second player to win the award for the fourth time, after compatriot Perpetua Nkwocha.

Pinnick said: “The Nigeria Football Federation celebrates Asisat Oshoala for her feat, which is well-deserved, and we urge her to continue to be a role model for both the Nigeria girl-child and the African girl-child. She is a walking prove of what is possible, if you pursue your dream with diligence, commitment, resilience and belief in God.

“I want to use her as a point of contact to encourage our women footballers and the girl-child in Nigeria to work hard and without ceasing at their dreams and the goals they set for themselves, and success will always come. It is not enough to set goals or admire role models; you have to work assiduously, have temperance and be ready to surmount odds and obstacles to get to your destination.”

Oshoala, who plays for FC Barcelona Feminil in Spain, was top scorer and best player at the FIFA U20 Women’s World Cup in Canada in 2014, and has since played at the 2015 and 2019 FIFA Women’s World Cup finals.