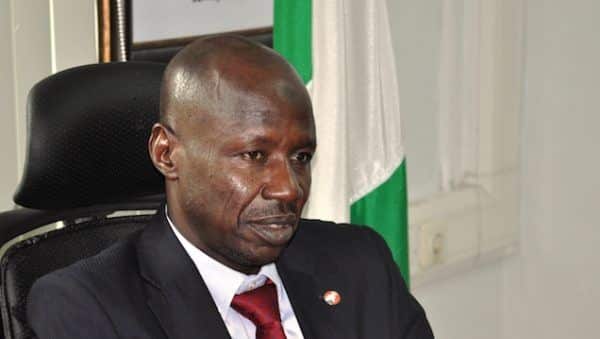 Share
Facebook Twitter LinkedIn Pinterest Email
The Centre for Anti-corruption and Open Leadership has congratulated the acting Chairman of the Economic and Financial Crimes Commission,Ibrahim Magu, who has been named the Vice-Chairman of the Heads of Anti-Corruption Agencies in Commonwealth Africa.
The congratulatory message was contained in a statement by the Executive Chairman of CACOL, Debo Adeniran.
The statement said: “The emergence of Magu’s has buttressed the point we have been trying to make Nigerians understand about the integrity and competence of the man – Magu – when it comes to battling corruption and its perpetrators to logical conclusions with deeply impactful outcomes.
“We are not surprised that an esteemed and credible body like Commonwealth Africa could recognize the virtues and potentials in Magu in terms of his abilities in fighting corruption because we know such bodies do not base their judgments on frivolities, political sentiments and expedience unlike it obtains in our country. And this should be really instructive to the maligners of Magu’s image given that a body like the Commonwealth Africa can repose so much confidence in the EFCC acting chairman to extent of making him Vice Chairman.”
“Like the proverbial prophet who is not respected at home, Magu has earned international recognition by this appointment for himself, the EFCC and most importantly, Nigeria amongst the comity of nations. This development has indeed revealed how much the anti-graft war under the captainship of Magu has helped in positively improving on the image of our country internationally.”
Adeniran added that Magu’s appointment is like an indictment on the dark forces representing the incurably corrupt tendencies among Nigerians who have tried everything to encumber the confirmation of the anti-corruption czar as the substantive Chairman of EFCC.
The Commonwealth Africa at its seventh regional conference which ended on Thursday in Malawi, took the decision to make Magu its Vice Chairman, while also choosing Nigeria to host its next conference in 2018.
The conference emphasized that a platform for sharing emerging practices and country innovation in the fight against corruption for the promotion of good governance was highly imperative.
Adeniran added in the statement: “This is really a remarkable development as it will facilitate international cooperation of anti-corruption bodies which will go a long way in helping the fight against corruption locally and globally. Corruption is a global menace that has been destroying the socio-economic fabric of several nations leading to the impoverishment of the global majority who bear the brunt of the consequences of sharp and corrupt practices.
“We once again call for the confirmation of Mr. Ibrahim Magu as the substantive Chairman of EFCC. He is the man for the job, his present achievements and past antecedents validates his competence and capabilities in terms of battling corruption beyond very reasonable doubts. Only the pro-corruption elements are uncomfortable with Magu becoming the substantive Chairman of EFCC, and this because “the guilty are always afraid.”
Centre for Anti-Corruption and Open Leadership Economic and Financial Crimes Commission Ibrahim Magu
Share. Facebook Twitter Pinterest LinkedIn Tumblr Email