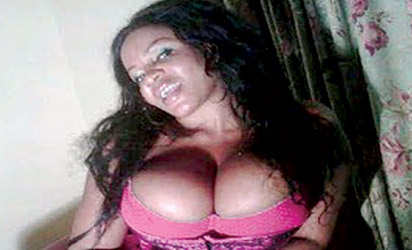 Busty Nollywood actress, singer and dancer, Cossy Orjiakor, we love to refer to as ‘Commotion Cossy’ is in the news again. This time, it is not about flaunting her voluptuous boobs before the cameras or getting some hapless young men drooling with fantasy with a show of laps and cleavages, this time, the sexy MamaGamma is taking her music career to the next level.
Cossy on phone told E-Daily that she would be doing an album launch come December 15, 2012 and she plans to feature several notable acts in the album. Though she declined to mention names but she promised that some of the names would be names already making waves in the music industry.
‘’I am putting finishing touches to the album. I can assure you that the album launch would be on December 15th of this year at the Prest Boat Cruise, Lekki. The album is a 15-track album. I am still gonna do small tidying up and work with other acts and producers’’ she said.
Cossy launched her musical career some years back and she has some singles to her name. Her top singles ‘’You Want Me’’ and ‘’You and Me’’ have worked the ground for the singer/actress and have indeed established her as a promising singer. The singles ‘’You Want Me and You and Me’’ are part of the 15-track album Cossy plans to unleash.
Vanguard.