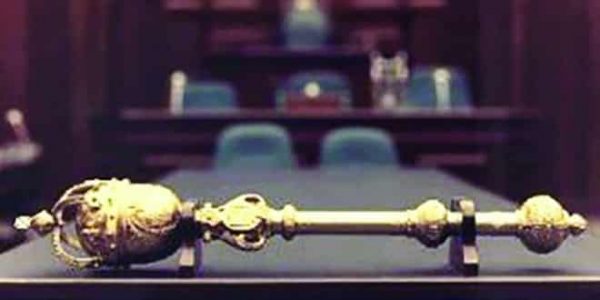 Share
Facebook Twitter LinkedIn Pinterest Email
The Kano State House of Assembly on Monday urged the State Government to hasten the repair of the collapsed bridge linking Gezawa and Minjibir Local Government Areas, to avert further disaster.
The assembly made the appeal after adopting a motion of urgent public importance tabled by Isiyaku Ali-Danja, the member representing Gezawa Constituency.
He said part of the bridge had collapsed and already a bus conveying some students from Yobe State had plunged into it.
Ali-Danja stressed that recent heavy rains being recorded in the area had further eroded the bridge and communities close to it, forcing seven households to abandon their homes.
He said: “Part of the bridge has collapsed over a month back due to heavy rain fall in the area and the situation is causing a lot of hardship to motorists using the road, especially farmers and businessmen.
“Also, for the past two days there has been heavy rainfall in the area, which caused a bus conveying students from Yobe State to miss its way and plunge under the bridge.
“Although, no life was lost, but some students in the vehicle were injured.
“The road is a major route for business people and farmers from within and outside the state conveying their goods to various markets within and outside Kano state.”
The Assembly, presided over by the Speaker, Abdullahi Ata, unanimously called on the state government and state emergency management agency to intervene in order to save lives.
Gezawa Local Government Area Kano State House of Assembly Minjibir Local Government Area
Share. Facebook Twitter Pinterest LinkedIn Tumblr Telegram Email