Burna Boy, girlfriend Stefflondon, parents, others party as he turns 28 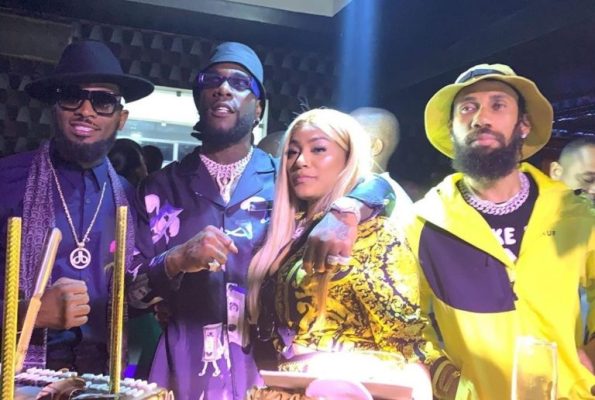 Afro-fusion sensation Burna Boy hosted his parents, girlfriend, Steflon Don, D’banj and other celebrities for his 28th birthday.
The News Agency of Nigeria reports that the “On The Low” singer had a homecoming and birthday party on Tuesday following his “Best International Act” BET win.
The party took an emotional turn when his mother, Bose Ogulu, and grandfather took turns to pray for him.
They prayed for him to have a long and fulfilling career and a Grammy win in the nearest future.
Burna Boy also had a dance off with his mother, grandmother, and girlfriend, UK-based ward winning singer, Steflon Don.
Also, musician Zlatan Ibile and celebrity dancer, Pokolee, and the other guests danced to the music at the shindig.
NAN reports that the BET had earlier sent him a congratulatory message.
It wrote @BET_Africa on Twitter: “Happy birthday to the multi-talented @burnaboy .
“Africans are so proud of how you’ve raised the bar in everything that you do. All the best for your next adventure and keep waving the flag high for Naija.”
Burna Boy, who just made the 2019 Forbes 30 under 30 list, began the musical year with hefty, fan-favourite tunes including “Dangote” and “Killin Dem” featuring Zlatan.
This followed his quick rise to stardom in 2018, which made him one of the top five stars of the year.
The singer performed at Coachella in April.
NAN.