Buratai to troops: I’m aware of your successes, setbacks but Boko Haram must be crushed

ICPC recovers over N81b assets in one year

The Chief of Army Staff, Lieutenant General Tukur Buratai, on Wednesday embarked on operational tour of troops’ locations in the theatre of operations against insurgency across the North East.
The News Agency of Nigeria reports that in all the locations visited, Buratai interacted with the officers and men.
While addressing troops in Super Camp 1 at Molai and the Special Forces Super Camp 12 in Chabbol near Maiduguri, he expressed his appreciation and that of President Muhammadu Buhari for their commitment, dedication and sacrifices to the nation.
Buratai emphasised the need for officers and men of the Army to reinvigorate their efforts and to hasten the defeat of insurgency in Nigeria.
He also directed the troops to train, prepare adequately and brace up for the final onslaught and eventual defeat of Boko Haram/ISWAP’s insurgency.
The COAS assured the troops that their additional operational needs would be provided in a couple of days, adding that the Army had already taken delivery of more fighting equipment procured by the Federal Government.
He said: “Gentlemen, I’m aware you have conducted many successful operations, you have also suffered setbacks, especially in recent times.
“You must ensure it is not repeated.
“You should prepare adequately for the next phase of the counter insurgency operation in our beloved country.
“Other issues expected of you will be communicated to you by your respective Commanders soon.”
NAN reports that among the locations visited by the COAS in addition to the two super camps were the Forward Operating Base at Alau Dam on the outskirts of Maiduguri.
He also accompanied the troops on patrol to Mairimari Forest located southeast of Tamsu Ngamdua in Mafa Local Government Area of Borno State.
Similarly, the patrol went through Maigilari Forest in the east of Tamsu Ngamdua in the southwest of the same Mafa Local Government Area.
These areas are generally known as the routes and directions of approach into Maiduguri by the terrorists.
A major highlight of the tour was the inspection of various military stores, hardwares and other assets, including artillery, mortar, anti aircraft guns, multi barrel launchers, armoured personnel carriers and many gun trucks among others in all the visited super camps. 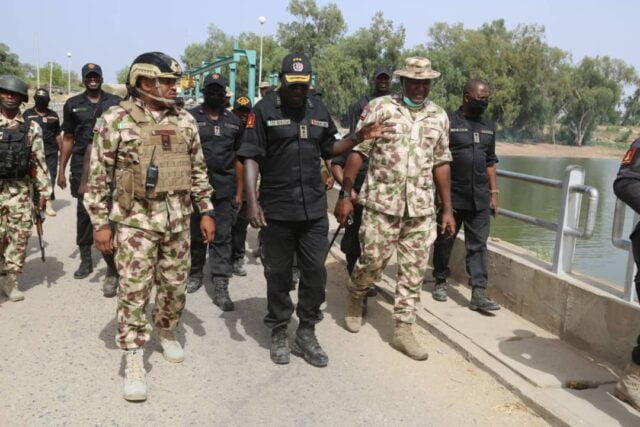 ICPC recovers over N81b assets in one year

Complete 13 guidelines for reopening of Churches, by CAN President

May 29: Umahi scores self low in housing, vows to complete critical projects