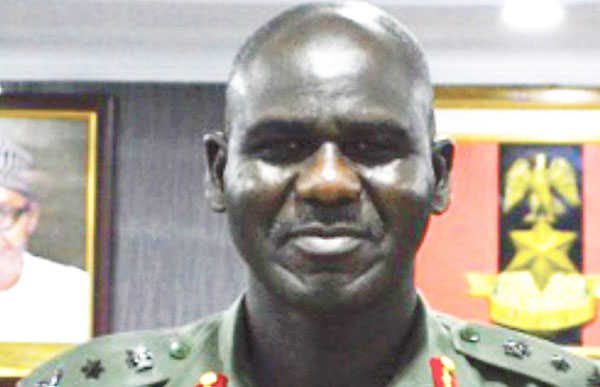 The Chief of Army Staff, Lt.-Gen. Tukur Buratai, has offered five youths of Gbajimba Community in Guma Local Government Area of Benue automatic recruitment into the Nigerian Army.
The News Agency of Nigeria reports that Buratai made the announcement on Wednesday, while interacting with members of the community shortly after he visited troops stationed in the area to ward off herdsmen attacks.
He immediately directed the Commander, 72 Special Forces Battalion, Lt.-Col. Suleiman Mohammed, who accompanied him on the visit to select the five youths and screen them.
Buratai said they must, however, possess recruitment requirements for enlistment.
He said: “The youths must be screened today – Wednesday and sent to the Nigerian army Depot in Zaira, on Thursday to join other successful candidates for training.”
NAN also reports that Gbajimba is one of the communities in Benue most hit by the recurring herdsmen attacks which had claimed lots of lives as well as destroyed property worth millions of naira.
NAN also reports that between April 26 and May 1, troops captured four killer herdsmen in the community before they could unleash mayhem on the people.
Buratai explained that the visit to Gbajimba and other troubled areas in Benue was to assess effort so far made to checkmate the attacks and restrategise against the menace.
He promised that more troops would be deployed to the state.
Torvani Dominic, the Secretary to Gbajimba community, appealed to the army to deploy more troops in the area, saying that the recurring attacks take place more in the night.