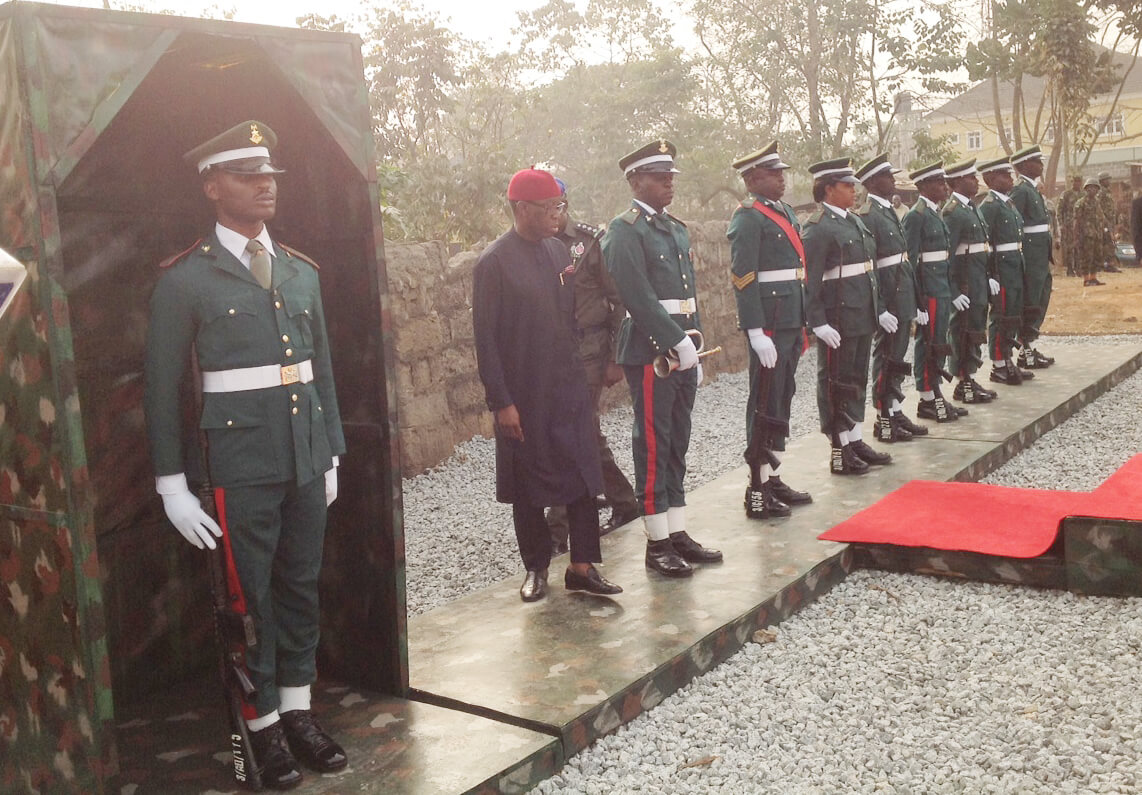 Share
Facebook Twitter LinkedIn Pinterest Email
The Chief of Army Staff, Lieutenant General Tukur Buratai, on Thursday inaugurated the 63 Brigade Nigerian Army and flagged-off operation Egwu Eke (Python Dance) in Asaba, Delta State.
Buratai, represented by Major General Jamil Sarham, General Officer Commanding, 6 Division, said the brigade would ensure peace, security and promote commerce in Asaba and its environs.
He said: “It is my great pleasure to inaugurate the 63 Brigade with its headquarters in Asaba.
“This is a demonstration of President Muhammadu Buhari’s desire to ensure security of lives and property across the country.”
Buratai said the essence was to checkmate the myriad of security challenges in the country.
He said the establishment of military formations required huge financial commitment, adding that while the various governments made provisions, other stakeholders would be required to support the project to ensure adequate security.
He said: “I therefore call on the government and the good people of Delta to support the operations of the 63 brigade and the formations in Koko and Oleh.
“I am also in Delta to flag off the operation Egwu Eke 3 (Python Dance) at Km 11, Okpanam Road, Asaba.”
Buratai assured all law abiding people of the state that the Army would ensure adequate security and safety even as the nation approaches the 2019 general elections.
He said the Army would work in cooperation with other security agencies to ensure peace in the state.
The army chief said at the end of the python dance exercise, “the python must have swallowed all the hoodlums, bandits, kidnappers and militants among others in the country.
“The python will also address the issues of fake news by unpatriotic elements; it is necessary that we draw the attention of all well meaning Nigerians that they must have at the back of their minds the importance of national security.
“Giving out official information or spreading fake news is inimical to national security.”
In his remarks, the State Governor, Dr. Ifeanyi Okowa, appreciated the Army for bringing the brigade to Asaba.
Okowa said: “We have just witnessed the inauguration of the 63 Brigade, Asaba and we give God all the glory and I want to appreciate the Chief of Army Staff for enabling this and thank the President for bringing it to Asaba.
“I am aware that the military, working with all other security agencies in the state, have done quite a lot to ensure peace.
“I also know that a lot have been done to secure our oil facilities in the state and in all, I appreciate our traditional rulers, the youths and various groups that have ensured that we have adequate information to ensure peace in our state.
“There is no doubt that with the 63 brigade being given birth to today, we will now have many more men to provide security in the state.
“We are a peaceful state, but criminals still abound just like they are in every part of nation.
“I believe that with combined efforts, all our security agencies will continue to maintain a peaceful disposition.”
The governor assured that the state government would support and ensure the full take off of the brigade within the limits of its finances.
Earlier, the Acting Brigade Commander, M.H.B. Manu, in a welcome address, said the command was committed to providing adequate security in Asaba.
Manu thanked the state government for providing the temporary headquarters for the 63 Brigade and requested for more support to secure permanent site for the brigade and the battalions in Koko and Oleh.
He called on the people of the state to support the brigade and all its formations in the state, and reiterated that its establishment by the federal government was to guarantee the protection of lives and property.
The Asagba of Asaba, Prof. Chike Edozien, represented by Chief Patrick Ndili, also lauded the establishment of the brigade.
Share. Facebook Twitter Pinterest LinkedIn Tumblr Email