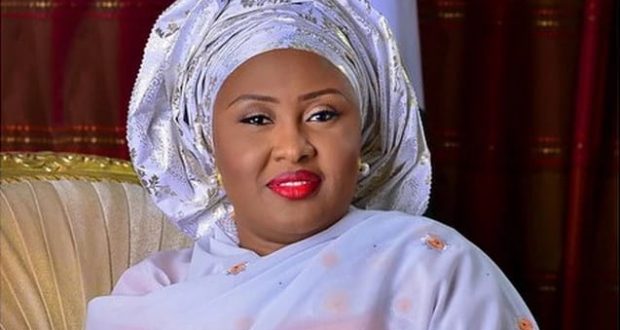 The wife of the President, Aisha Buhari, on Wednesday hosted some women leaders to a low key celebration to commemorate the second term victory of President Muhammadu Buhari.
The women, who converged on the official residence of the family at the Presidential Villa, Abuja, also joined the family in prayers for God guidance and protection.

The News Agency of Nigeria reports that the event was attended briefly by President Muhammadu Buhari, who thanked the women for their loyalty and support to his administration.
Some of the women who spoke to NAN after the celebration expressed confidence on the ability of President Buhari to deliver Nigeria to the next level of development.
Dr Hajo Sani, the Senior Special Assistant to the President on Administration, expressed gratitude to Nigerians for their optimism in the administration.
Sani urged them to sustain the tempo.
According to her, the next level campaign embarked upon by President Buhari administration is aimed at consolidating the successes recorded in agriculture and infrastructure development in the country.
She said: “The next level which is the next four years ahead is a period where Nigerians will really experience what they are expecting from the President.”
The North East Coordinator of Aisha Buhari Foundation, Zuwaira Gambo, said the re-election was a great opportunity for the people of the zone to consolidate on the peace building.
We pray that this next level will bring more social intervention in the north east.’’ wife of the former Military Administrator of Lagos State, Munnira Buba Marwa, expressed gratitude to almighty God for delivering the second term bid of President Buhari.

Marwa said the Buhari`s re-election would go a long way to consolidate on his achievements recorded so far.

She also acknowledged the contributions of women and youths during the electioneering.Hajiya Naja`atu Mohammed, an APC stakeholder, said Buhari’s re-election was a victory for women .