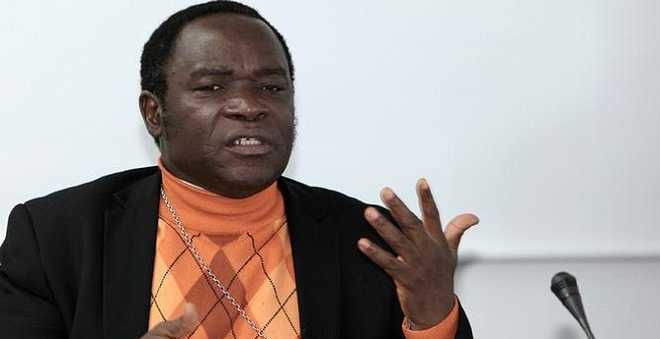 Fiery Catholic Bishop of Sokoto Catholic Diocese, Bishop Matthew Hassan Kukah, has expressed anger against the Buhari Administration’s war against corruption and said President Muhammadu Buhari does not understand corruption.
“My worry is that President Buhari thought and probably still thinks corruption is stealing money, and the people stealing money are largely bureaucrats or government officials,” Bishop Kukah said, comparing the current approach of the President to his failed efforts in 1984 when he was Military Head of State.
He added that the people who are his new friends and party members in the All Progressives Congress were the same people he jailed in 1984.
He also said it is as a result of the greatness of former President, Dr. Goodluck Jonathan, that he has not stepped forward to unearth those things he knows about corrupt people in the country, who are now part of the Buhari Administration.
Kukah added: “There are people who are key kingpins in APC today who were sentenced to various years of imprisonment by Buhari in 1984, some up to a 100 years, but since this is Nigeria, many of them have finished serving their 100-year jail term.
“Buhari was not brought into power by angels.
“We know the nature of the vehicle that would bring anybody to the Presidency of Nigeria.
“Well, there are a lot of people who were beneficiaries of Jonathan’s corruption.
“I guess it’s a measure of the man’s greatness that he has not stepped forward to tell people the things they need to know.”
Speaking on GatefieldTV programme, #ConversationswithAbangMercy, Kukah attacked President Buhari on the issue of religion and said the government has failed to address the killing of Christians and other ethnic minorities across Nigeria.
He said: “Over two years, with all the killings across the Middle Belt, across Nigeria by Fulani herdsmen, by all kinds of people, destruction of churches, everything that has taken place, we have not heard an official statement from the government not to talk of having a conversation about compensation.”
Bishop Kukah also revealed the several issues things he is angry about with the Buhari government and argued that the real opposition to his Presidency resides within his government.