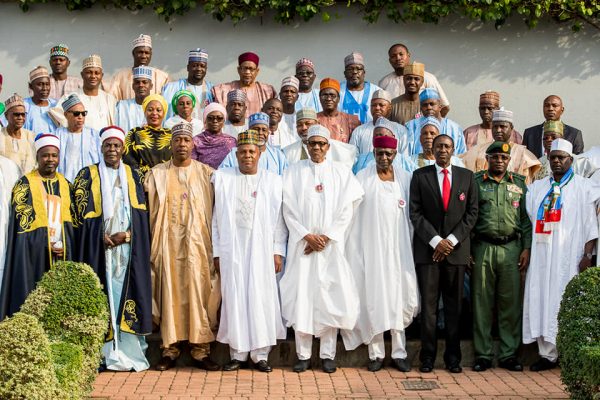 Share
Facebook Twitter LinkedIn Pinterest Email
President Muhammadu Buhari has formally received various members of the Peoples Democratic Party’s Support Groups from the North East, who defected to the ruling All Progressives Congress.
Receiving delegation of the North East political stakeholders, including the defectors led by Umar Bukar Bolori, at the Presidential Villa, Abuja, on Monday, Buhari commended them for their wise decision and also welcomed the new members to the APC.
He said he was not surprised by their defections because a good majority of the people in the North East were traditionally APC members and supporters.
Buhari  thanked the defectors for demonstrating their support and love to him and the APC.
He urged them not to relent in their efforts aimed at ensuring electoral victory for the APC in the forthcoming general elections.
Bolori, who later spoke to State House correspondents, said the country needed someone like President Buhari for speedy transformation of the nation’s economy.
He said: “The issue is not on whether a Northerner is leading the country or not.
“It doesn’t matter.
“We need somebody who can actually deliver the goods.
“We witnessed what happened when Abubakar Atiku was the Vice President of this country.
“Basically he was the defector president in the first term of former President (Obasanjo) but nothing to show in the entire North East
“We have confidence in Buhari and that is why we are now with him.”
Former Governor of the old Borno State, Mohammed Goni, who was among the defectors, said he defected from the PDP to join the APC due to respect he has for Buhari.
Goni, who governed old Borno State from 1979 to 1983, said his defection was also informed by the achievements of the President, particularly in the area of security as relative peace had returned to the northeast.
Goni, who was also PDP governorship candidate in the 2011 general election, said: “I know the President very well.
“I was the council Secretary when he was Governor of North East.
“He is a performer.
“We want the President to continue.
“We don’t want him to go because if he goes, the insurgency will not end.
“If a new person comes, the process will start all over.
“The way he is handling that problem now shows he is energetic and committed to the course.
“So, he needs time to consolidate what he has done.
“It is important to keep him in office for two consecutive terms.”
apc Muhammadu Buhari north-east PDP
Share. Facebook Twitter Pinterest LinkedIn Tumblr Email