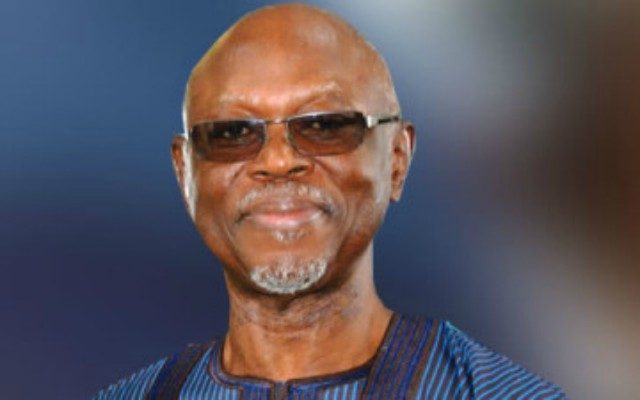 Chief John Odigie-Oyegun, former APC National Chairman, has said that the President Muhammadu Buhari led administration is rebuilding the foundation of the country towards economic prosperity.
He made the statement on Friday in Ibadan during the 60th Anniversary lecture of Inner Circle of Friends, University of Ibadan at Trenchard Hall of the university.
The News Agency of Nigeria reports that Oyegun delivered a lecture titled: Nigeria’s Political System and the Educated Youth: Yesterday, Today and Tomorrow.
Oyegun said the present administration had tried a lot in rebuilding the economic and infrastructural foundation which it met in a very deplorable circumstance.
The former governor of Edo State said that the present administration was pursuing vigorously infrastructure programmes that could place the nation on permanent growth and development.
He said: “All these efforts were targeted at ensuring people have food on their table while not enriching foreign nations. This, the administration has done with significant progress.
“You can see that power generation has been improved from 3,000mw which the administration met it to 7,000mw. I am sure that an additional 3,000mw would be added from the Mambilla power project.
“So, also is the revamping of the railway system to boost transportation and not only rebuilding the roads.”
He said that no government or regime could grow the nation alone; saying all they could give was incremental addition.
Oyegun further explained that corruption and lack of proper planning had hindered the progress of the country for many years, adding the efforts of the Buhari administration had rendered corruption less arrogant as it used to be.
He said that the administration had lots of loads to carry as the country was progressing, saying the growth and development of the nation would have been established at the end.
He said: “The nation’s resources in the years of plenty were adequately invested in infrastructure for agriculture, education and others to thrive.
“Four years is not honestly and adequately enough to judge an administration. We have made some mistakes and hope to redress them.
“I think this administration deserves more years to solidify the ongoing rebuilding process. The alternative is inconsiderable.”
He said that the nation had produced some of the most competent and confident youths across the world, appealing to them to be passionate about the development of the nation.
He said the kind of youths the nation needed were the passionate and confident ones, saying the nation did not need those inspiring to attain power for wealth.
The former APC leader said that the problem of youths could not be solved without power because most opportunities available for exploration were power-driven.
He added: “We have in the past ill-prepared the youths for the challenges they are facing today. Thank God, the Not-Too-Young to rule bill has been signed, though with enormous hurdles ahead to claim power.”
Prof. Kayode Adebowale, UI Deputy Vice Chancellor (Administration), said that the university was doing its best towards re-orientating the students to be useful for the society and nation at large.
Adebowale, who represented the Vice Chancellor, Pro. Idowu Olayinka, urged the youth to embrace the virtues of the nation’s great leaders and play significant roles in nation building.
Earlier, Asekun Ajibola, the Star, Inner Circle of Friends, said the choice of the topic was to enlighten present members, who are mostly undergraduates on the roles desired from them in nation building.
NAN reports that among the old members of the association honoured were: Prof. Anya Oko Anya, Prof. J. C. Azubike, Prof David Udokali and Prof. John Cookey.
Also awarded at the event were: Banigo Tekena, Ayibome Star and Gabriel Edor, who emerged first, second and third respectively in the association’s essay competition.
Tekena, Star and Edor were also presented with cheques for N75,000, N50,000 and N25,000 respectively.