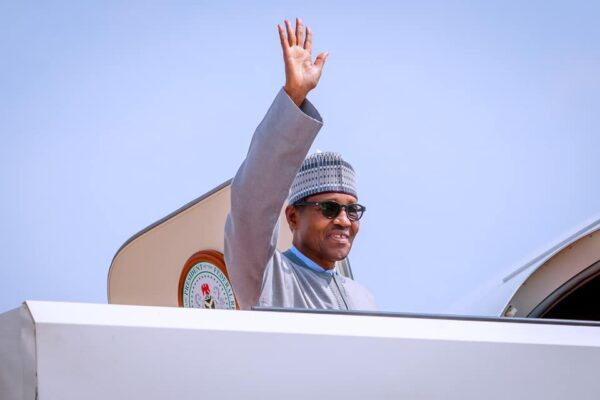 President Muhammadu Buhari will depart Abuja on Friday for London to participate in the inaugural UK-Africa Investment Summit holding on January 20.
Femi Adesina, the President’s Special Adviser on Media and Publicity, in a statement in Abuja on Thursday, said the event would be hosted by the British Prime Minister, Boris Johnson.
According to the organisers, the event is expected to bring together African leaders, international business chief executives and heads of international organisations “to create new partnerships that will deliver more investments and jobs” to the benefit of people and businesses in African countries and the United Kingdom.
Adesina added in the statement: “Apart from highlighting new perspectives on UK-Africa Partnership for Prosperity, issues of Sustainable Finance and Infrastructure; Trade and Investment; Future African Growth Sectors and Clean Energy and Climate, are expected to dominate presentations and discussions during the Summit.
“With the expected take-off of the African Continental Free Trade Area (AfCFTA) in mid-2020, the London investment summit will provide Nigeria with the opportunity to project itself as a leading investment destination for new industries.
“In addition, the summit will deepen Nigeria-United Kingdom investment ties post-Brexit given that Africa currently represents just two per cent of British trade activity, with Nigeria accounting for only 10 per cent of that total.”
Adesina further disclosed that the Nigerian delegation to the investment meeting will showcase what the Federal Government had done through policies and legislations to improve the investment and business climate in the country.
While in the United Kingdom, according to the presidential aide, Buhari will meet with the Head of the Commonwealth, Prince Charles, in Glasgow, Scotland.
“The President and his delegation will also have bilateral meetings with Prime Minister Johnson as well as heads of multilateral organisations,” he added.
Adesina said the President would be accompanied to the Summit by Governors Yahaya Bello of Kogi, Muhammad Inuwa Yahaya and Okezie Ikpeazu, Gombe and Abia States respectively.
Also on the presidential entourage are the Minister of Foreign Affairs, Geoffrey Onyeama; Minister of Industry, Trade and Investment, Otunba Niyi Adebayo; and the Minister of Finance, Budget and National Planning, Zainab Ahmed.
Others include the National Security Adviser, retired Major General Babagana Monguno; and the Director General, National Intelligence Agency, Ambassador Ahmed Rufai Abubakar.
Buhari is expected back in Abuja on Thursday.