Buhari in Katsina, to hold talks with Togolese President 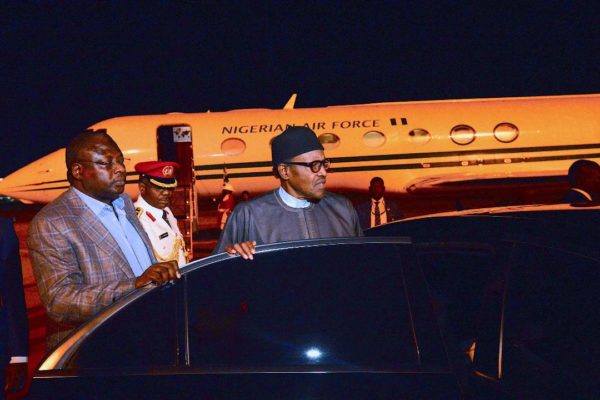 President Muhammadu Buhari on Friday arrived Katsina for a two-day official visit.
The News Agency of Nigeria reports that the presidential aircraft carrying him and some aides landed at the Umaru Musa Yar’Adua International Airport Katsina at about 9.56 a.m.
The president was received by Governor Aminu Masari, Ministers, State and Federal Government officials.
He also inspected a guard of honour mounted by a joint team of the Nigerian Army and the Nigeria Police Force at the airport.
NAN reports that Buhari is billed to hold talks with the visiting Togolese President Faure Gnassingbe Eyadema while in the state.
He will also pay sympathy visit at the palace of Emir of Katsina Alhaji Abdulmumuni Usman where he would address traditional, community and religious leaders as well as stakeholders in the state on national issues.
Buhari would use the opportunity to condole the government and people of the state over the recent flood disaster occasioned by windstorm and downpour.
About six persons died during the disaster which also resulted in damage to over 530 houses in the state.