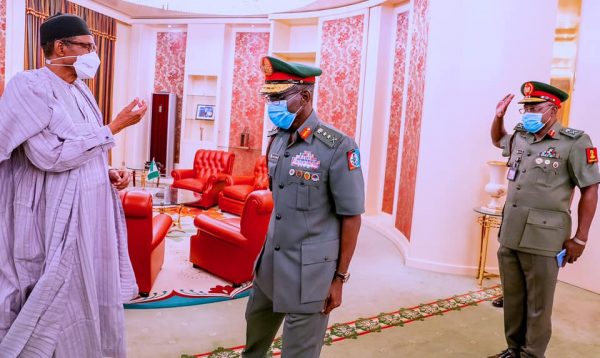 The News Agency of Nigeria reports that the Minister of Defence, retired Major General Bashir Magashi, accompanied by the Chief of Defence Staff, General Lucky Irabor, presented Yahaya to the President.

Yahaya was appointed on May 27 to replace Lieutenant General Ibrahim Attahiru, who died along with 10 other military officers in a place crash in Kaduna.

Fielding questions from State House correspondents, Magashi said Buhari shared with them his experience, which they intended to use to address the nation’s security challenges.

He said: “What really brought us to the Villa today is to present the new Chief of Army Staff, Major General Farouk Yahaya, who was just appointed 11 days ago to the President for his blessings and guidance.

“The President offered advice on how we can go about doing this operation to improve the entire security of the country.

“Being an actor in the field in the past, he has given us a direction in which we can learn from his experiences and apply that to our mode of operations.

“With that, we are wiser today and we assured him that we will do our best to bring an end to the problem of security in this country.”

Magashi said the issue of synergy among the Armed Forces and all security agencies was stressed at the meeting, adding that there would be many changes in the security situation of the country.

According to Magashi: “There will be more collaboration between all security agencies, particularly with the police, as they work hard to bring about peace in parts of the country where there are challenges.

“In the North Western part of the country, the major issue there is that of kidnapping, banditry and other criminalities.

“We are taking the challenge but you know really, that is a constitutional responsibility of the police.

“But we are giving maximum cooperation to them in order to see an end to the insecurity in the North West.

“In the North East, it is a different scenario, where there is Boko Haram issue, which is an ideological thing.

“We are up and doing to ensure that we bring an end to the Boko Haram issue, especially with the current development about Islamic State West African Province.