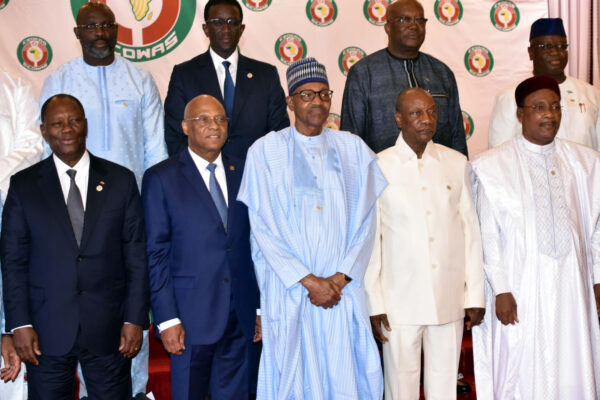 President Muhammadu Buhari says the insecurity challenges in the West African subregion can only be effectively tackled if a common strategy is adopted by member states.
Buhari, who is the chairman of the Economic Community of West African States Authority of Heads of State and Government, stated this at the opening of the 55th ordinary session of the Summit of the ECOWAS, in Abuja on Saturday.
He said: “Taking into account the transnational nature of the threats confronting us, the need for the adoption of a common strategy at the national and regional level to combat them, has become imperative.
“By so doing, we will reinforce our actions and resources for a more effective response to protect our citizens and secure our common space.
“While I acknowledge that several initiatives and measures have been taken in our respective countries recent developments have shown that we must cooperate more effectively to achieve our goals.
“We should send a strong and unified message to the perpetrators of violence that we are resolute in our collective determination to confront and defeat them.”
According to him, member states of the ECOWAS must remain focus in their collective endeavor in the areas of peace and stability so as to achieve the set goal of the organization.
He said the call had become imperative in view of the fact that despite the overall appreciable progress made, particularly in the field of political governance, the sub-region had continued to face considerable security challenges.
He said: “We are all witnesses to the recurring incidents of inter-communal clashes, herders-farmers conflicts, banditry and terrorist attacks in all our countries.
“These threats, you will agree with me, have consequences on the peaceful co-existence between our communities and peoples as well as their livelihoods.
“This unrest also undermines all our efforts in achieving full regional integration. It is, therefore, necessary that we act collectively to end this menace in the interest of regional stability and wellbeing of our people.”
President Buhari, therefore, expressed the organisation’s sincere sympathies and condolences to the families of the victims of terrorist attacks, banditry and inter-communal clashes perpetrated by some misguided elements in the societies.
He assured that the regional leaders would not relent in their efforts to protect the peace loving people and their properties, while vigorously sustaining the war against terrorism and criminality.
The Nigerian leader maintained that as the organization continued to strive to create a secure, stable and prosperous environment in West Africa, member states must also intensify efforts to ensure sustainable economic and social development in the sub-region.
He said, by doing so, the member states would be able to tackle poverty and youth unemployment and contribute to sustained stability in their respective countries.
President Buhari revealed that several issues relating to different policies,
programmes and projects, itemized for discussion at the 55th ordinary session would also be deliberated and considered.
He said: “Considering the high level of interest you all attach to regional cooperation and integration, I am confident that our Summit will witness robust discussions and produce sound decisions.”
The president used the opportunity to thank the African Union, the United Nations and all other bilateral and multilateral partners for their sustained cooperation and assistance, saying that ”we value their partnership”.
In his remarks, the President of the ECOWAS Commission, Jean-Claude Brou, lamented that the subregion is witnessing an upsurge in inter-communal clashes.
According to him, the terrorist attacks target religious groups, with the clear purpose of undermining social cohesion in the sub-region.
He also noted with concern that the burdened funding the fight against the growing insecurity on budgets of member states had reached levels which compromised national financial equilibrium and funding for social and economic development.
He, therefore, proposed that the organisation should convene an extraordinary summit in the near future on the fight against terrorism.