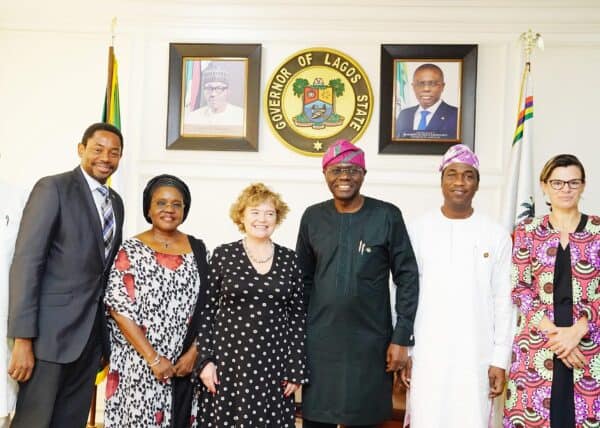 The British High Commissioner to Nigeria, Catriona Laing, on Friday met with Lagos State Governor, Babajide Sanwo-Olu, to discuss bilateral partnership, which focused on three key areas of common interest: technology-driven water transportation, investment and smart city initiative.
The Governor, in company of his deputy, Dr. Obafemi Hamzat, received the British envoy and her entourage in his office for the bilateral meeting, which was held behind closed doors.
The envoy said the meeting was necessary as it was in continuation of a dialogue with the Lagos State Government on areas of partnership.
Addressing reporters after the meeting, Laing said discussion with the Governor and his Deputy focused on strategies to be adopted by the Lagos State Government and private sector partners to enable the state realise its aspirations to be a leading city in technology and innovation on the African continent.
She said: “There are three topics in particular that we discussed.
“The first is around the Governor’s vision and how the United Kingdom can support Lagos to achieve that vision.
“Technology is changing the world.
“Lagos is one of the few city-states in Africa that is well positioned to take advantage of the fourth industrial revolution around innovation, robotics and artificial intelligence.
“The Governor is very clear on achieving this objective.
“He said his job is to provide necessary infrastructure, particularly power and broadband.
“At the back of that, the private sector will come in and support in that aspiration.”
The envoy said there was a discussion around the African Investment Summit holding in London next January in which 20 African countries, including Nigeria, would be participating.
The summit, she said, would come with significant benefits for Lagos because of unrestrained access to investors and finance.
She said the summit would offer a platform for Nigeria to rebrand itself by convincing some of the investors on how it is solving some of its challenges, especially in security and infrastructure.
Laing said the UK would be willing to support Lagos specifically in two key areas of harnessing the waterways for efficient transportation and digital inclusion, which are the hallmarks of smart cities.
She said: “There are two specific projects we are helping Nigeria to achieve in Lagos.
“One is around future cities, which focus on how Lagos could use its waterways.
“The second is around digital inclusion, bearing in mind that Lagos is an innovation hub.
“We want to ensure that there is inclusive approach to technology and training people to take advantage of the opportunity.”
The envoy described the meeting with Governor Sanwo-Olu and Hamzat as rewarding, noting that the British High Commission would be looking forward to achieving the goals with the Lagos State Government.
The meeting was also attended by the Secretary to the State Government, Folashade Jaji; Head of Service, Hakeem Muri-Okunola; Chief of Staff, Tayo Ayinde; Deputy Chief of Staff, Gboyega Soyannwo; Political Adviser to the British Deputy High Commission, Lagos; Wale Adebajo and the outgoing British Deputy High Commissioner, Laure Beaufils.