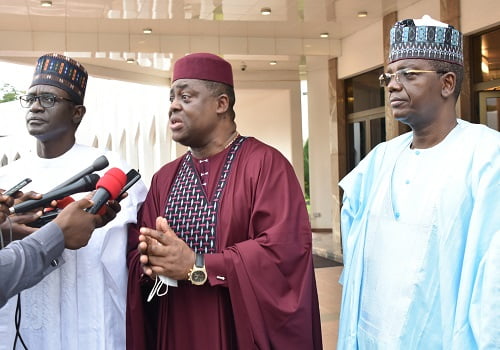 Former Minister of Aviation, Chief Femi Fani-Kayode, has officially been received into the ruling party, the All Progressives Congress (APC).

He was presented to President Muhammadu Buhari as the newest member of the ruling party, at the Presidential Villa on Thursday by Governor  Yobe State and Chairman of the APC’s Caretaker Committee, Governor Mai Mala Buni, and the governor of Zamfara State, Bello Matawalle.

Speaking to State House correspondents after the meeting with President Buhari,  Fani-Kayode, who said he decamped from the opposition Peoples Democratic Party (PDP) for the sake of the country’s unity, said he had been responsible for many other defections into the ruling party.

According to him, he was instrumental to three PDP governors decamping into the APC, naming governors Dave Umahi of Ebonyi State, Ben Ayade of Cross River State and Bello Matawale of Zamfara State.