Breaking: Video as Nnmadi Kanu surfaces in Israel months after disappearance from Nigeria

The Supreme Leader of the proscribed Indigenous People of Biafra, Mazi Nnmadi Kanu, has surfaced in Jerusalem, Israel, nine months after his disappearance from his home town in Abia State.
Kanu went of out public view last year August during the Nigerian Army’s Operation Python Dance in Abia State.
Radio Biafra announced the surfacing of Kanu.
According to Radio Biafra, Kanu is currently in Jerusalem.
IPOB, on its official website, said: “This is Mazi Nnmadi Kanu, the Supreme leader of Indigenous people of Biafra praying live in Jerusalem. The whole world is standing attention.
“Enemies of Biafra, are sobbing and crying for the great Lion of the Tribe of Biafra is Back.
“Lovers of Freedom, the Battle has just began. Evil Gossip and bastard, shall bow.
“Their faces will be mudded with shame and our generation must restore Biafra.”
It could be recalled that Kanu was reportedly spotted by security agents in Ghana.
Since the military raided his home in Aba, Abia State, there has been speculation that he was arrested and might have been killed.
At some point, a former Governor of Abia State, Orji Uzor Kalu, said Kanu was in London.
His disappearance has stalled his trial for treason.
One of those who stood surety for him when he was granted bail after spending 18 months in detention, Senator Enyinnaya Abaribe, has sought to be discharged from the obligation after his disappearance. 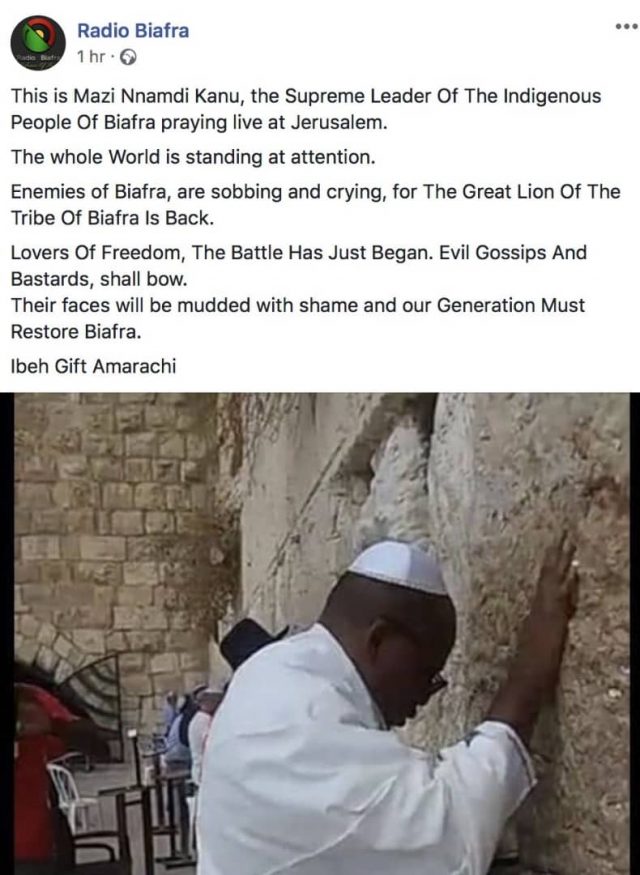