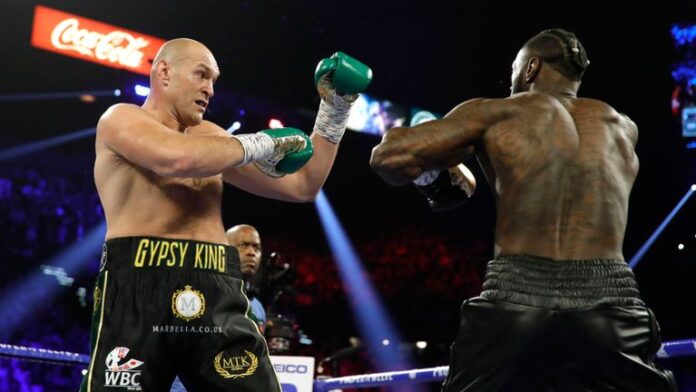 Tyson Fury has beaten Deontay Wilder in their WBC heavyweight rematch in Las Vegas.
The victory comes 14 months after the two heavyweights fought to a draw in a dramatic fight, and a sold-out crowd was on hand at the MGM Grand arena to watch them do it again.
Fury, the ‘Gypsy King’, entered the arena held aloft on a throne by handlers, a royal robe around his shoulders and a crown on his head as the song Crazy by Patsy Cline played.
Deontay Wilder enters the ring prior to the Heavyweight bout for Wilder’s WBC and Fury’s lineal heavyweight title against Tyson Fury on February 22, 2020 at MGM Grand Garden Arena in Las Vegas, Nevada.
Wilder followed a few minutes later, his face hidden behind a glittery mask and a rapper in front of him.
Both fighters were guaranteed $5m for the bout but could make $40m or so if the fight performs well on pay-per-view.