The supporters of Senator Ali Modu Sheriff and Senator Ahmed Makarfi on Wednesday turned the National Secretariat of the Peoples Democratic Party located at Zone 5 in Abuja to a battle ground. 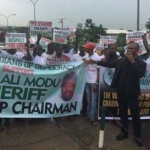 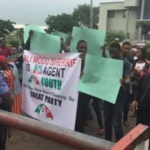 Both Sheriff’s and Makarfi’s supporters stormed the Wadata House in their dozens displaying banners in support of their preferred party leader.
While the pro-Sheriff supporters called on the PDP Governors to embrace him so as to move the party forward, the pro-Makarfi asked Sheriff to vacate the chairmanship seat having been rejected by party chieftains, including the Board of Trustees.
The police personnel deployed to the secretariat however did not allow the ensuing commotion to degenerate to serious violence.
The Eagle Online recalls that Sheriff on Monday stormed the party secretariat to take charge as the leader of the party.
While addressing the press, he insisted he remains the national chairman of the party, saying the exparte order granted by the Federal High Court in Port Harcourt, Rivers State restraining him from parading himself as chairman had expired.
However, the Caretaker Committee headed by Makarfi, through its spokesperson, Dayo Adeyeye, on Tuesday also addressed the press at the party secretariat, accusing Sheriff of having been contracted by the All Progressives Congress to destabilize the PDP.

11 interesting things you should know about Africa