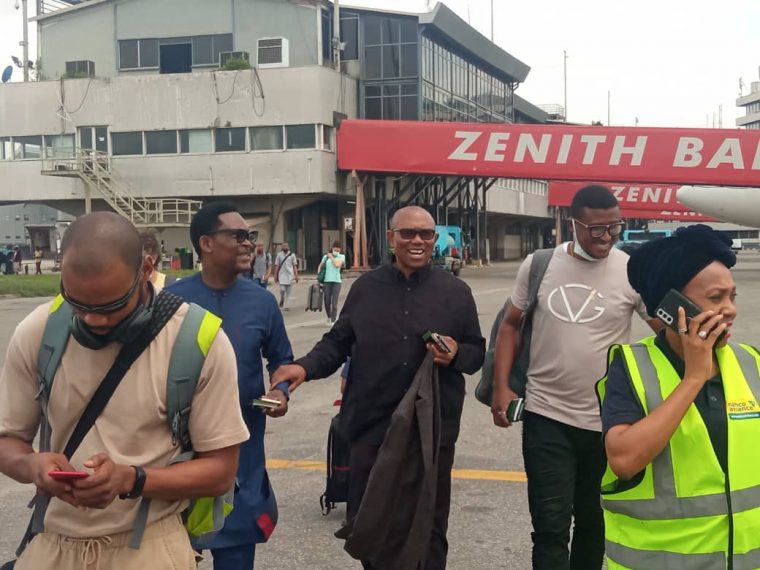 The presidential candidate of the Labour Party, Peter Obi, was literally held hostage on Saturday at the Nnamdi Azikiwe International Airport, Abuja by excited Nigerians.

This occurred just Obi, who was without a security aide, returned from Egypt, where he travelled to on July 14, 2022.

Recall that the former two-term Governor of Anambra State had on July 14, 2022 announced his departure for Egypt, where he said he will be understudying some aspects of the country’s life.

He had tweeted on his Twitter handle shortly before departing Nigeria via the NAIA: “I just departed for Egypt on a 3-day visit as part of my detailed study of comparable countries to Nigeria.

“In Egypt, I am expected to understudy, among others, the Egyptian Power Sector, Education, Planning and Finance Sectors.”

On arrival on Saturday, Obi was swopped on by excited Nigerians who wanted a photo opportunity with him.

The Egypt Air flight, according to the flight details obtained by The Eagle Online, landed at 1:41pm.

As Obi came out into the luggage area, several other passengers swarmed around him.

In the process, the phone of a lady who wanted to take a selfie with him fell down.

Obi bent down to pick it for her, but she beat him to picking up the phone.

He also had to make a request of the adults for him to take a shot with three children, who appeared to be of the same family.

Recall that while Obi was away, the deadline for the submission of names of candidates for the 2023 national elections fell due on July 17, 2023.

Following this, the name of a placeholder, Dr. Doyin Okupe, was submitted to the Independent National Electoral Commission as his running mate.

Okupe himself has confirmed that he is only a placeholder until the process of finding a vice presidential candidate for Obi is completed.

Already, there are indications of a working relationship between the Labour Party and New Nigeria Peoples Party.

The NNPP, with former Kano State Governor, Rabiu Kwankwaso, as the presidential candidate, has confirmed that it is in talks with the Labour Party.