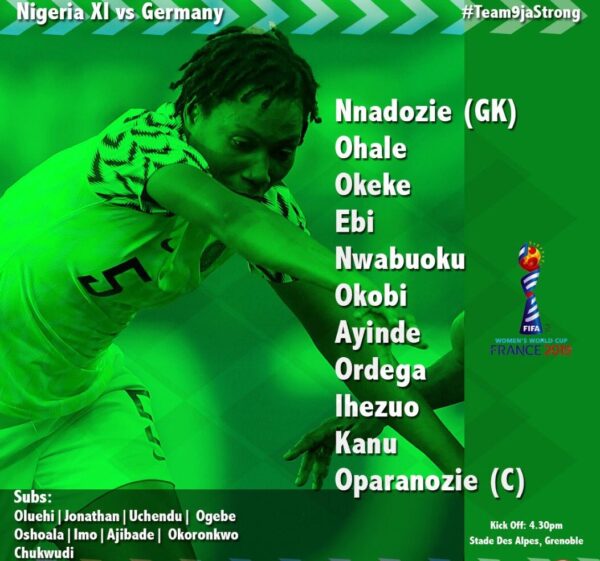 Former African Woman Player of the Year, Asisat Oshoala, will start from the bench as the Super Falcons file out against Germany in the Round of 16 at the ongoing FIFA Women World Cup in France.
Oshoala, who scored a goal against Korea Republic, would be hoping to hit the back of the net if the opportunity presents itself once again against the Germans.
Nnadozie Chiamaka kept her place in goal while Osinchi Ohale, Chidinma Omeke, One Ebi and Evelyn Nwabuoku would provide her cover.
Falcons coach, Thomas Dennerby opted for Ngozi Okosi, Halimat Ayinde, Francisca Ordega and Chinwendu for the midfield, while the duo of Uchenna Kanu and the team’s captain Desire Oparanozie are charged with striking role.
The substitutes are; Tochukwu Oluehi, Jonathan, Chinasa Uchenna Ogebe, Anam Imo, Amarachi Okoronkwo and Ogonna Chukwudi.
The tie is slated to kick off at 4:30pm Nigeria time.