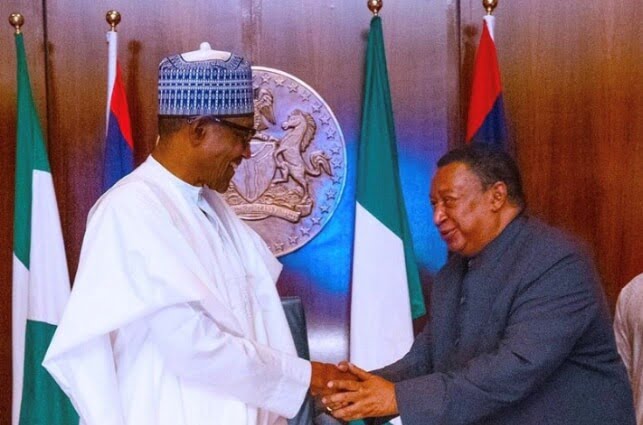 Nigeria’s Dr. Mohammed Barkindo, the Secretary-General of the Organisation of Petroleum Exporting Countries, is dead.

Kyari spoke in a statement posted on his official Twitter page in the early hours of the day.

He tweeted: “We lost our esteemed Dr Mohammed S Barkindo.

“Certainly a great loss to his immediate family, the NNPC, our country Nigeria, the OPEC and the global energy community.

“Burial arrangements will be announced shortly.”

The News Agency of Nigeria reports that Barkindo, who is the outgoing OPEC Secretary General, was in Nigeria where he delivered the Chairman’s Keynote Address at the ongoing Nigerian Oil and Gas Conference in Abuja on Tuesday.

At his last official outing at the NOG, Barkindo was given a standing ovation by industry stakeholders for his outstanding contributions to the Nigerian and global oil and gas industry.

He had earlier in the day visited President Muhammadu Buhari in the Presidential Villa (see photograph used for illustration), where he was hailed by the President for being a “worthy ambassador to Nigeria.”

Born on April 20, 1959 in Yola, Adamawa State, Barkindo served as the Secretary General of OPEC since August 1, 2016 and would have bowed out on July 31, 2022 following the completion of his tenure.

He completed his Bachelor’s Degree in Political Science from Ahmadu Bello University Zaria in 1981 and Masters of Business Administration degree from Washington University in 1991.

Prior to the MBA, in 1988 he earned a PostGraduate Diploma in Petroleum Economics from Oxford University.

Also, he was awarded an honorary doctorate from the Federal University of Technology Yola.

Barkindo previously served as the acting Secretary-General in 2006 and represented Nigeria on OPEC’s Economic Commission Board from 1993 to 2008.

He also led the Nigerian National Petroleum Corporation from 2009 to 2010 and headed Nigeria’s technical delegation to United Nations climate negotiations since 1991.

Barkindo will be replaced by Haitham Al-Ghais, a veteran of the Kuwait Petroleum Corporation, as the organisation’s Secretary-General following his demise.

In a tribute to Barkindo on his contributions to the global energy industry, OPEC said he was instrumental in expanding the organisation’s historical efforts to support sustainable oil market stability.

OPEC said on its website: “This was through enhanced dialogue and cooperation with many energy stakeholders, including the landmark Declaration of Cooperation (DoC) since its inception in December 2016.

“These efforts are widely credited with helping to stabilise the global oil market since the unprecedented market downturn related to the COVID-19 pandemic, and providing a platform for recovery.”

It said: “He is known internationally for helping to produce the United Nations Framework Convention on Climate Change (UNFCCC) and the Kyoto protocol as the leader of Nigeria’s technical delegation to the UN negotiations in 1991.

“He has remained a key contributor to the UNFCCC process, including most recently at the 26th Conference of Parties (COP) meeting in Glasgow in October and November 2021.”