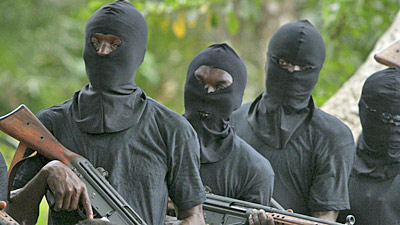 Breaking: Militants kill six policemen in fierce gun battle in Lagos
No fewer than six policemen are reported dead in Adaxson community on Liasu Road in Lagos State, The Eagle Online has learnt.
This followed a gun battle with suspected militants who invaded the area in the early hours of Tuesday.
The Eagle Online learnt that the militants attacked the patrol van in which the policemen were riding, which left it riddled with bullets.
Sources said soldiers were immediately deployed to the scene, leading to another fierce gun battle.
The militants, who were overpowered have retreated to the Igando Creek, where The Eagle Online learnt they have engaged another set of militants in another round of gun battle.
It was gathered that the two militant groups had a deal.
However, one of them disappeared with the loot from the deal, hence the fight.
The militant suspected to have taken off with the money was said to have been tracked to the Igando Creek after he fled Ikorodu, where the deal was struck and the money paid.
However, before the others could get to Igando, he had fled, leading to an attack on his godfather.
The godfather was said to have been killed alongside a Mobile Police Force operative attached to him.