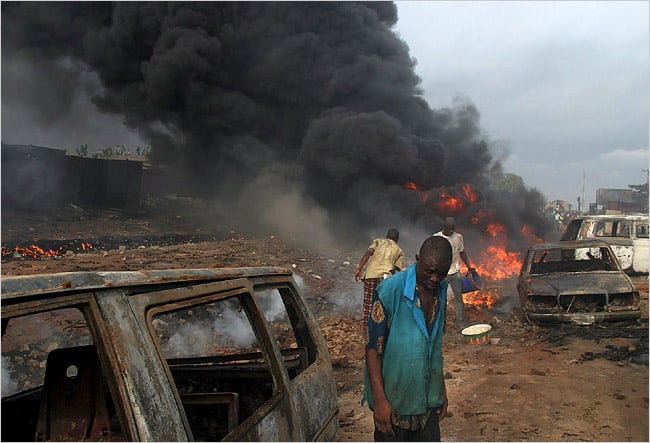 Many persons are feared dead in a still raging fire caused by pipeline explosion in Ijegun area of Lagos State.
However, the Lagos State Emergency Management Agency could only confirm two dead as at press time.
So also have over 30 vehicles been confirmed burnt in the explosion caused by the activities of pipeline vandals.
LASEMA said the explosion occurred when security operatives intercepted suspected vandals who were engaged in illegal siphoning of petroleum products from the Nigerian National Petroleum Corporation pipeline in the area.
A statement by LASEMA’s Chief Executive Officer, Femi Osanyintolu, said the suspected oil thieves had already loaded a 33,000 litre tanker and were on the verge of loading the second tanker of the same capacity when security agents showed up.
In a bid to escape arrest, the suspects set a fire which was aided by the fuel that spilled as a result of the vandalism.
Osanyintolu said in the statement: “The above incident occurred this morning 4 July 2019 at 5am.
“On arrival of LRT to the scene of the incident, it was gathered that some vandals were engaged in bunkering activities at Fire Junction, Ijegun within the vicinity where an NNPC pipeline was buried.
“The vandals had already siphoned petrol into a 33,000litre tanker,. While a second tanker of the same capacity was being loaded, security agencies suddenly intercepted the vandals. While trying to escape from the security agencies, some of the siphoned fuel spilled into the drainage and the vandals were alleged to have set the spilled fuel on fire in a bid to deter the security agencies from apprehending them. The fire then spread back to the pipeline, the point where the vandals had siphoned the fuel and exploded with escalating fire which led to 2 fatalities and over 30 vehicles burnt. The actual loss will be determined upon conducting post disaster enumeration after the fire has been put out.
Osanyintolu said responders at the scene included operatives of the Lagos State Fire Service, Nigeria Security and Civil Defence Corps, Nigeria Police and those of LASEMA.