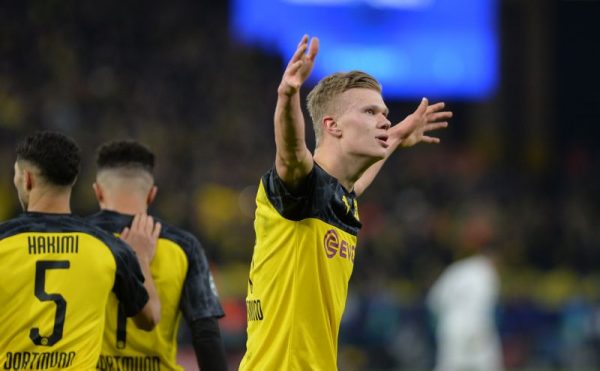 Manchester City have signed Erling Haaland from Borussia Dortmund, with the Norwegian striker putting pen to paper on contract, the Premier League club announced on Tuesday.

Haaland, 21, will join City at the end of the season having spent two-and-a-half successful years at Dortmund, where he has so far scored 85 goals in 88 appearances in all competitions.

Haaland’s impending arrival at the Etihad Stadium ends City’s search for a long-term successor to club-record goalscorer Sergio Aguero, who joined Barcelona last summer before announcing his retirement in December due to a heart condition.

City have been operating this season without a recognised striker and have largely thrived.

Pep Guardiola’s side are the Premier League’s leading scorers and sit top of the table, although the absence of a proven goalscorer has been costly at key times, most notably in the Champions League semi-final defeat to Real Madrid, a tie they dominated only to exit 6-5 on aggregate after extra time.

The hope is that Haaland, with 134 goals in 182 career appearances and 36 assists, will fill that need for a focal point in attack.

City had attempted to sign a striker last summer but their pursuit of Tottenham’s Harry Kane fell short after Spurs chairman Daniel Levy demanded £150 million ($185.5m), effectively pricing the England captain out of a move.

Haaland will cost significantly less, with the Norwegian’s release clause set at €75 million ($79.3m), although some reports claim City will pay less than that.

Haaland, the son of former Leeds United player Alfie Haaland, came through the youth ranks at Norwegian side Bryne before joining Molde at 16 years old.

Haaland had also been on Real Madrid’s radar but the Spanish champions’ top target is Paris Saint-Germain forward Kylian Mbappe, who is available to discuss terms over a free transfer move with his current PSG contract set to expire at the end of next month.