Breaking: Why I chose Sen. Shettima as my running-mate — Tinubu 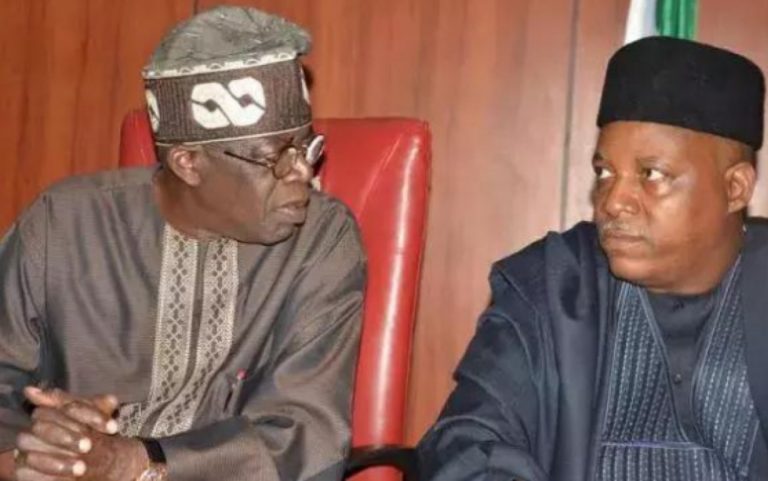 Share
Facebook Twitter LinkedIn Pinterest Email
The ruling All Progressives Congress (APC) presidential candidate,  Asiwaju Bola Tinubu, has named a former Borno State Governor, Senator Kashim Shettima as his running-mate, for 2023 presidential election.
Tinubu, a former Lagos State Governor unveiled his Vice-Presidential candidate in a special address, personally signed by him and delivered Sunday.
Speaking on opposition to Muslim – Muslim ticket and the reason for his final choice, Tinubu declared competence and innovation supersede all other sentiments, saying: “If I am to be that type of President, I must begin by being that type of candidate. Let me make the bold and innovative decision not to win political points but to move the nation and our party’s campaign closer to the greatness that we were meant to achieve.
He restated: “Here is where politics ends, and true leadership must begin.
“Today, I announce my selection with pride because I have made it not based on religion or to please one community or the other. I made this choice because I believe this is the man who can help me bring the  best governance to all Nigerians, period, regardless of their religious affiliation or considerations of ethnicity or region.
“May I say this to all of you, especially to those who will be disappointed in my selection based on religious considerations. I will not and cannot ignore the religious concerns and ethnic sensitivities of our people. Taking them into due consideration is an important part of good and able governance. But religion, ethnicity and region cannot always and fully determine our path. To forge ahead as a nation toward development and prosperity, we must break free of old binds. We must recalibrate our political calculations to where competence and fairness matter more than reductive demographics”.
The National Leader of the APC declared the strong points being articulated informed why, he announced the selection of Senator Shettima  as his partner and running mate in “the mission to advance and reclaim the fortunes of this great country and the hopes of its people”.
On his capability, Tinubu asserted “Senator Kasim Shettima’s career in politics and beyond shows that he is eminently qualified not only to deliver that all important electoral victory, but, also, step into the shoes of the Vice President.
“As a man with the talent, maturity, strength of character and patriotism he has my implicit confidence and faith.
He noted that he is aware that many would continue focus on a particular detail, the question of his faith.
“However, if we truly understand the challenges upon us a nation, then we must also see the imperative of placing  competence in governance above religious sentiment”.
Recall that The Eagleonline has reported earlier today that Tinubu would unveil Shettima today (Sunday) as his running-mate, with a visit to President Muhammadu Buhari in Daura, Katsina State.
The APC presidential candidate recalled in 1993, Nigerians embraced Chief MKO Abiola and a fellow Muslim running mate, Baba Gana Kingibe in “one of our fairest elections ever held”.
He declared: “The spirit of 1993 is upon us again in 2023.
“As such, the ticket we present today represents a milestone in our political history. It symbolizes our party’s determination to be a leading light among political parties in Africa.
“The democratic process and the decorum that characterised our presidential primaries and the selection of our vice presidential candidate exemplifies why we are the party of the people and of the betterment of their future.  With this selection the All Progressives Congress surely shall continue to be the party that shows the way and carries this nation towards its best future. I implore you all to join with me on this journey to a brighter future.”
apc Asiwaju Bola Tinubu Chief MKO Abiola Senator Kashim Shettima
Share. Facebook Twitter Pinterest LinkedIn Tumblr Telegram Email