Breaking: Fayose to EFCC: I will be in your office for questioning; gives date, time

Edo election: We have learnt our lesson — APC

Buhari reluctantly congratulated me for defeating his party’s candidate — Obaseki

The Ekiti State Governor, Ayo Fayose, has written to the Economic and Financial Crimes Commission, saying he will be available for questioning once he leaves office.
Fayose’s position was contained in a letter he wrote to the EFCC, dated September 10, 2018.
In the letter stamped received on September 11, 2018 and addressed to the Chairman of the anti-graft agency, Ibrahim Magu, Fayose said he will be in the EFCC office on October 16, 2018 at 1pm.
He said he was ready to clarify issues or answer questions on issues within his knowledge.
The Governor-elect of the State, Dr. Kayode Fayemi, has vowed to send Fayose, who was elected on the platform of the Peoples Democratic Party, to jail over allegations of fraud.
Fayemi, elected on the platform of the All Progressives Congress in the last governorship election in the state, accused Fayose, the Chairman of the PDP Governors’ Forum of monumental fraud. 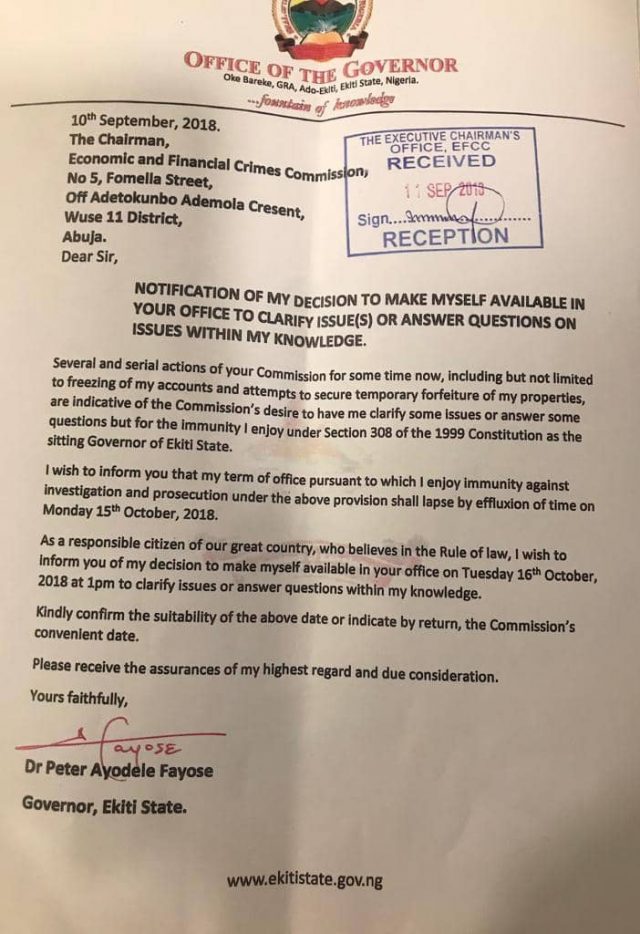 Edo election: We have learnt our lesson — APC

Buhari reluctantly congratulated me for defeating his party’s candidate — Obaseki