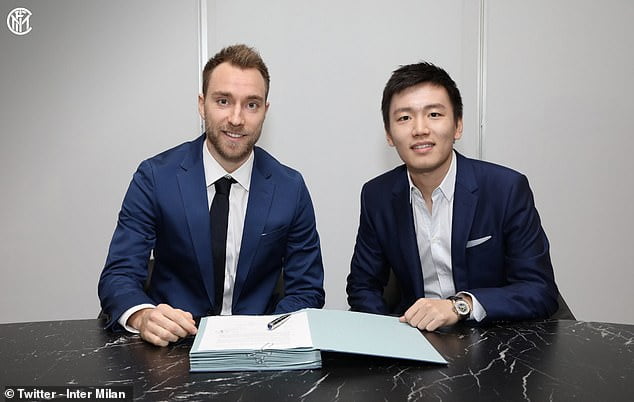 Christian Eriksen completed his move from Tottenham to Inter Milan on Tuesday, becoming the Italian club’s third signing of the January transfer window.
Inter paid a reported 20 million euros ($22 million) for the 27-year-old Denmark midfielder despite his Tottenham contract expiring in July.
Inter said he signed a five-season deal with the Serie A club through June 2024.
All three of Inter’s signings this month have come from the Premier League.
Ashley Young joined from Manchester United and Victor Moses signed from Chelsea, although he spent the past year on loan at Turkish club Fenerbahçe.
Inter is challenging for the Serie A title and is currently second, three points behind eight-time defending champion Juventus after three straight draws.
Eriksen said in the off-season that he might want a new challenge after six years at Tottenham.
His displays this season have dipped way below his usual standards, with even Tottenham manager Jose Mourinho saying he wasn’t seeing the best Eriksen.
Eriksen has scored three goals in all competitions for Tottenham, where he has been used mostly as a substitute.
The Denmark playmaker has been one of Tottenham’s best players in recent years, his vision, set-piece delivery and goals crucial in making the team a regular in the Champions League and even challenging for the Premier League title.