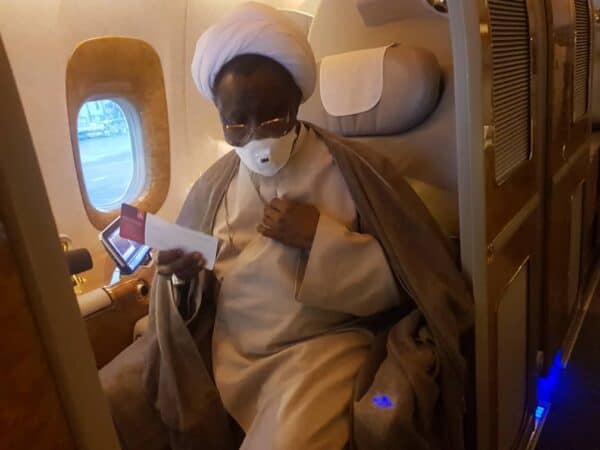 The Leader of the Islamic Movement of Nigeria, Sheikh Ibraheem El-Zakzaky, and his wife, Zeenat, are back in the country, The Nation is reporting.
According to the newspaper, the couple arrived the Nnamdi Azikwe International Airport at about midday.
They flew in with the commercial flight of Ethiopian Airlines.
El-Zakzaky and Zeenat had on Monday left for India for medical treatment.
They, however, returned unattended to after they insisted on their terms and conditions for the treatment.
Key among the conditions were having their own Doctor attend to them and being moved into a 5-Star hotel.
El-Zakzaky also complained about the heavy security around him, saying he wanted to be free to move around and receive visitors.
As at the time of filing the report, The Nation said El-Zakzaky and Zeenat were still at the airport.
It said operatives of the Department of State Services were arranging how to get them out of the airport.
The duo have been in detention before the court ordered they should be allowed to go for medical treatment.