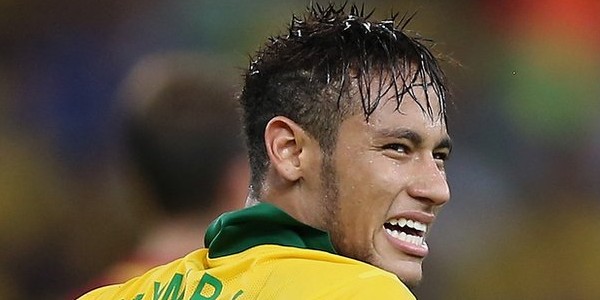 Brazil will face Chile in the World Cup’s round of 16 after Neymar’s double helped secure a 4-1 win over Cameroon in Brasilia.
The victory at the Estadio Nacional confirmed the hosts as Group A winners and booked them a duel with their fellow South Americans in the first of the knockout stage matches, in Belo Horizonte on Saturday.
Neymar now has 35 goals in 52 caps to his name, with only Pele and Zico having a better goals-per-game average for Brazil – but both those greats’ totals of 77 and 66 respectively look achievable for this prodigy.
Cameroon Head Coach, Volker Finke, made three changes to the Indomitable Lions side that began the 4-0 thrashing by Croatia in Manaus last time out.
In came right-back Allan Nyom, left-back Henri Bedimo and midfielder Landry N’Guemo. Out went the suspended Alex Song, plus defenders Aurelien Chedjou and Benoit Assou-Ekotto.
The hosts opened the scoring in the 17th minute.
Luiz Gustavo won the ball on the left and then motored down the wing before whipping a low cross into the area for Neymar to sidefoot home with his right boot past Charles Itandje for the 100th goal of the tournament.
But Cameroon continued to threaten and within 10 minutes, they forced an equaliser. Thiago Silva’s back header hit the angle of the Brazil goal, and then Dani Alves could not contain Nyom who had popped up on the left following another corner.
He passed the ball across for Joel Matip left free by Marcelo – to score from close range.
Back came Brazil, with Neymar grabbing his second in the 34th minute.
Surging forward into the area from the left channel after Marcelo’s pass, the 22-year-old came inside Nicolas N’Koulou and fired home low with his right foot to notch his fourth goal in three games.
The best move of the half involving Neymar and Fred then ended with Hulk scooping over under pressure.
The second half was only four minutes old when Fred found a third goal.
Half-time substitute, Fernandinho, kept the ball alive on the edge of the area following a corner and flicked it left, where David Luiz was in space.
His ball in was stuck home at close range by Fred – benefitting from a tight offside decision – to spark wild celebrations.
A fourth goal arrived in the 84th minute.
A quick Cameroon free-kick was taken too sloppily and Oscar managed to steal the ball back.
Some rapid interplay of passing returned the ball to the Chelsea man again and he presented a chance for sub Fernandinho to arrive and slide home the fourth.
Mexico’s goal rush in Recife against Croatia made it tight, but Brazil finished top on goal difference to set up a last-16 date with the Chileans, who were runners-up in Group B.