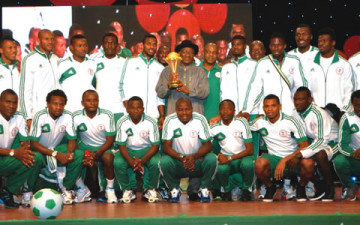 Brazil 2014: Ethiopians assures Super Eagles of good fight
No fewer than 90 Ethiopians have been granted visas to watch the World Cup second leg play-off match between the Walya Antelopes and Nigeria’s Super Eagles on Saturday at the U. J. Esuene Stadium, Calabar, Cross River State.
The Walya Antelopes lost 1-2 to the Super Eagles in the first leg at the Addis Ababa National Stadium on October 12.
Officials at the Nigerian Embassy in Ethiopia confirmed to the News Agency of Nigeria on Wednesday in Addis Ababa that a list of 40 persons comprising the players, technical crew, the media and FA officials, were granted visas.
NAN also learnt that the list included 50 members of the Ethiopian Supporters Club, who were cleared for the trip to Nigeria.
Meanwhile, strikers Salhadin Said and Getaneh Kebede had resumed full training with the Antelopes on Monday.
Salhadin arrived in the camp on Monday from Egypt where he plays for Wadi Degla while Getaneh flew in from from South Africa where he plays for Bidvest Wits.
Ethiopians are confident that their team would win the match in Calabar for the country’s first appearance in the World Cup in Brazil.
The Coach of the team, Sewinet Bishaw, said the arrival of the two strikers had given him more options.
Bishaw said: “I am happy to have all my players in camp.
“It gives me more option ahead of the Nigeria match.”
He promised to surprise the Super Eagles in Calabar.
NAN reports that the team is expected to depart Addis Ababa on Friday aboard an Ethiopian Airline chartered flight ahead of the Saturday clash.