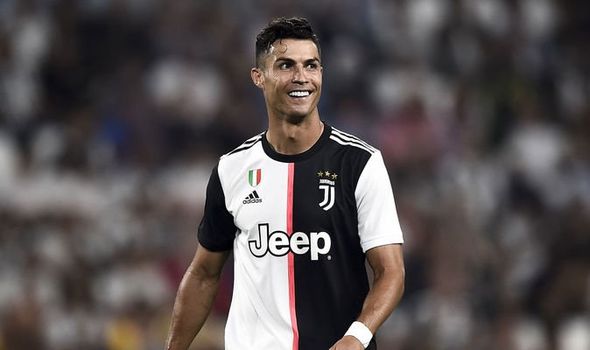 Cristiano Ronaldo scored twice to set yet another goalscoring landmark and help Juventus to a 3-1 home win over Udinese on Sunday to send them top of the Serie A table.
In-form Ronaldo, who scored five goals in his last four games, took his tally for the season to 11 in 19 appearances.
He became the only player in Europe’s top five leagues to hit double figures in all competitions in each of the last 15 seasons.
The Portuguese struck twice in the first half before Leonardo Bonucci headed in Juve’s third on the brink of half-time.
Ignacio Pussetto netted a consolation for the visitors late in the game.
“The most important thing was to win,” Ronaldo later said.
“This is how we should play, with confidence. Individual performances aren’t what matters, but the collective effort.”
Juventus suffered their first defeat of the season at Lazio last weekend to surrender the lead to Inter Milan.
But the champions put pressure back on Antonio Conte’s side by moving one point clear at the top with victory at the Allianz Stadium.
Maurizio Sarri’s side have 39 points, but Inter Milan can regain first place by beating Fiorentina away in the late game on Sunday.
Udinese remain in relegation trouble after falling to 17th place on 15 points, hovering just two points above the drop zone.
Gianluigi Buffon started in goal for Juventus to match Alessandro Del Piero’s club record of 478 Serie A appearances.
Ronaldo was given the rare opportunity to start in an attacking trident alongside Paulo Dybala and Gonzalo Higuain.
They needed just nine minutes to find the breakthrough when Dybala’s deflected shot fell into the path of Ronaldo, who fired in a low finish from the edge of the box.
After Dybala looked to have made it 2-0 with a sublime lob only for it to be ruled out for handball in the build-up, Ronaldo scored again after 37 minutes.
The Portuguese latched on to Higuain’s through ball to smash a shot into the bottom corner.
The game was over as a contest by half-time after Merih Demiral rose to head a corner-kick towards the six-yard box, where Bonucci was on hand to nod in off the crossbar.
Ronaldo came close to a hat-trick in the second half when his powerful shot was palmed onto the post by Udinese goalkeeper Juan Musso.
The excellent Buffon was denied a clean sheet at the death when Pussetto prodded in from close range.
Elsewhere, European hopefuls Atalanta lost 2-1 at Bologna to miss out on the chance to move into the top four.
Gian Piero Gasperini’s side remain sixth after goals from Rodrigo Palacio and Andrea Poli put Bologna in command before Ruslan Malinovskiy pulled one back.
Hellas Verona completed a remarkable fightback against Torino as they recovered a three-goal deficit to draw 3-3, with all three substitutes scoring inside the final 21 minutes for the home side.
Two goals from Cristian Ansaldi either side of Alex Berenguer’s strike gave Torino a handsome lead, but Giampaolo Pazzini pulled one back from the penalty kick spot on 69 minutes.
Later on, Valerio Verre and Mariusz Stepinski also found the net.
Reuters/NAN.