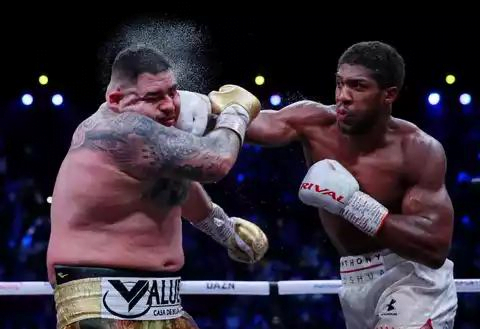 Hon. Abike Dabiri-Erewa, Chairman/CEO Nigerians in Diaspora Commission has congratulated Nigerian-born boxer, Anthony Oluwafemi Joshua, for defeating his opponent Andy Ruiz Jr in Saturday’s World Heavyweight Boxing fight in Saudi Arabia, thus reclaiming his World Heavyweight titles.
Dabiri-Erewa gave the commendation in a statement by NIDCOM’s Head of Media and Public Relations, Abdur-Rahman Balogun, on Sunday in Abuja.
She said that the victory over the Mexican was not only a thing of pride to Nigerians, but to Africa as a whole. “I congratulate you on this wonderful feat, for winning this tensed but historical fight.
“We are truly proud of you and urge you to continue to use your professional prowess to extol the virtues of Nigerian heritage.
“Your shinning beacon serves as inspiration to the youth of Nigeria.
“Your victory is also a testimony to the fact that Nigerians are great people, contributing in many ways to the development of the country and the continent as a whole,” Dabiri-Erewa stated.
She noted with satisfaction that in spite of the challenges being faced by Anthony in his career, he had remained determined, focused, and did
not allow that to lure him into any form of criminality or depression.
Anthony Joshua, a.k.a AJ, became a two-time world heavyweight champion
with a unanimous decision after he garnered 118 – 110, 118 – 110, and 119 – 109 ponits against his opponent in a tensed rematch.
Joshua cut his opponent in round one and dominated the fight throughout.
Six months on from the night Ruiz stunned the boxing world, Joshua risked seeing his career left in tatters for a second defeat before more than 14,000 spectators at the Diriyah arena, but served up 36 minutes of movement and well-timed punching to take the IBF, WBA, and WBO titles back to Britain.
Joshua, 30, was born in Watford to Yoruba parents from Southwest Nigeria.
Joshua and a fellow Nigerian boxer, Ben lleyemi, made their professional debut together in 2013.
A.J now joins a small cluster of men including Muhammad Ali, Lennox
Lewis, Evander Holyfield, Mike Tyson and Floyd Patterson to have
reclaimed the world heavyweight title.
He was a bricklayer before taking up boxing full-time.
He also excelled in playing football and athletics and broke nine-year-old 100-metre record with a time of 11.6 seconds.