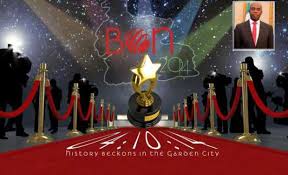 The organizers of the prestigious Best of Nollywood Awards have unveiled versatile screen goddess, Bimbo Akintola, and talented actor, Gideon Okeke, as the hosts for the seventh edition of the Awards.
The 2015 awards will hold on December 13, 2015 at the Ultramodern event and cultural center, THE DOME, sited in the heart of Akure, Ondo State.
Akintola and Okeke will be playing host to a constellation of Nollywood big horns, top government functionaries of the host state and select guests from the corporate world.
The event will also feature some exclusive performances by some highly-acclaimed entertainers and comedians.
Highly esteemed Akintola made her Nollywood debut in the 1995 blockbuster, OWO BLOW.
Since then, she has grown to become a phenomenon in the industry.
Star actor Okeke came mainstream after his appearance in MNET AFRICA’s daily drama series, Tinsel.
He has since carved a niche for himself in the Nigerian movie industry.
Hosts of BON Awards in the past included Fred Amata and Gbemi Olateru, Nonso Diobi and Slyvia Nduka.