by The Eagle Online
in Featured, News
3 min read
1

A child victim of the Boko Haram insurgency, Ali Ahmadu, has successfully undergone spinal cord surgery in Dubai, United Arab Emirates.
The six-hour surgery ended the agonizing three years Ahmadu has spent on wheelchair after he was run over by rampaging Boko Haram terrorist who attacked his village in Chibok, Borno State.
Ali was flown out of the country by the Dickens Sanomi Foundation, which is headed by the Chairman of Taleveras Group, Igho Sanomi.
The Foundation had collaborated with a Non-Governmental Organization, the Global Initiative for Peace, Love and Care, which called attention to Ahmadu’s plight.
The GIPLC, headed by Nuhu Kwajafa, had approached eminent Nigerians for assistance, culminating in the Dickens Sanomi Foundation picking the bill.
According to records released on Sunday from Dubai, Ahmadu was operated upon on September 17, barely seven days after arriving in the United Arab Emirates.
He underwent spinal cord surgery at Zulekha Hospital, Sharjah in Dubai.
But contrary to doctors’ predictions that Ali will be able to walk after three weeks of recuperation, the little boy without prompting on Sunday was on his feet.
The doctors at the hospital described his quick recovery as a “miracle”.
A brief by Igho Sanomi from Dubai said: “Miracles do happen. For those of you who don’t believe in God, better believe in God now.
“This is Ali Ahmadu who was run over by Boko Haram terrorists in 2014. The boy and his pregnant mother were left under a three for three days. The boy was bleeding from mouth and nose throughout the agonizing days.
“Ali’s spinal cord was damaged and he couldn’t walk again. For three years, help was needed. God made it possible after five to six hours of surgery and 48 hours in intensive care. Little Ali could walk again. This happened today to everyone’s surprise.
“This determined six-year old boy got off his bed and decided to walk despite doctors’ expectations that he would need physiotherapy to learn to walk again at least three weeks after surgery. Today, Ali walked after just seven days.
“This made my day and I am so proud of the Dickens Sanomi Foundation for making this surgery possible financially.”
Kwajafa, who collaborated with the Sanomi Foundation, tells the story of Ahmadu’s journey so far: “After five hours on the 17th of September and almost 48 hours in Intensive Care Unit, Ali Ahmadu had a very successful procedure.
“It has been a divine journey starting far away in Chibok in 2014. It is the story of a little boy left to die, underneath a tree, to where (Dubai) we are today.
“It is about a fighting spirit, a resolute charming soul and spirit beating all odds to survive and walk again.
“It seemed unachievable but thanks to all our efforts. We have cause to rejoice.this is to say a big thank you from Ali’s family and GIPLC. Most especially our best regards goes to the President of the Senate, Dr. Bukola Saraki and his colleagues who set the ball rolling towards raising funds and awareness for the surgery.
“Our profound gratitude goes specially to Dickens Sanomi Foundation for making it all happen and for being at the hospital with Ali.
“This surgery was made possible by the esteemed Foundation. Thank you once again the Chairman of the Foundation, Igho Sanomi and its Board of Trustees.
“We thank the press( print and electronic). We cannot do it without you.
“We are grateful.
“We thank Nigerians for their prayers and well-wishes.
“God will bless you all immensely.
“God has done it again.” 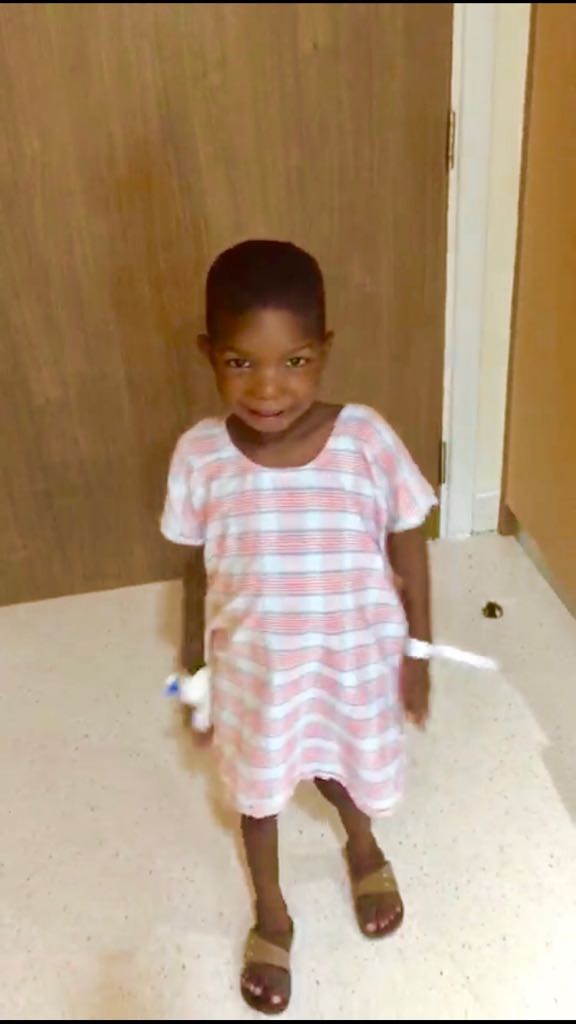 Tales as Nigerian ladies trafficked to Lebanon return, with some pregnant