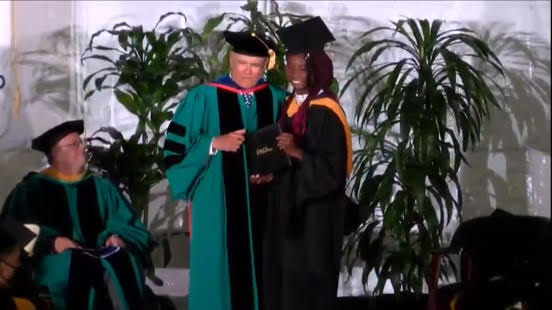 Zion Umar, Maiduguri-born daughter of the late Secretary of the Christian Association of Nigeria (CAN), Borno State chapter, on Saturday graduated with a Master’s degree in the United States of America.

Ms Umar bagged a Master’s degree in Business and Science in Los Angeles, the day after the eighth anniversary of the May 14, 2013 terror attack in which she and her dad were shot by Boko Haram in their home. 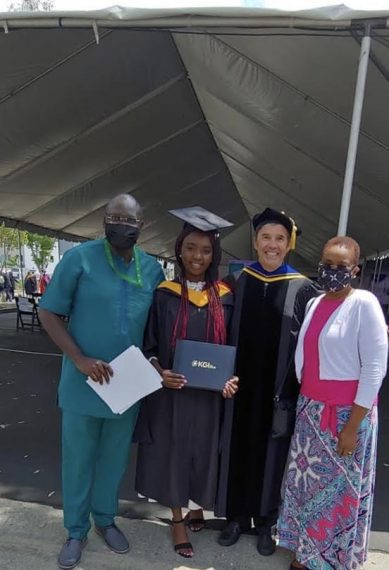 She had earlier obtained a Bachelor of Science degree from a California university.

Zion’s achievement is one born out of incredible tenacity, given the experience she has been through.

With a Boko Haram bullet lodged in her head in the 2013 attack, it was almost unthinkable to envision that eight years after, this teenager would have garnered two academic degrees from an American university.

Rampaging Boko Haram Islamist terrorists stormed their home in Maiduguri in 2013, and grabbed her pastor father, Rev Umar Pama, who had a passion to care for orphans in insurgency-filled city.

Zion pleaded passionately with the gunmen for her father’s life, but the terrorists warned her to get back into the house or be killed. Before she could do so, they opened fire killing her father and lodged a bullet in her head too.

Thus began two months of searing headaches and life in and out of hospital operating theatres before the bullet was successfully extracted.

Emmanuel Ogebe, a US-based human rights lawyer, heard her story, and two years later in 2015, had her moved out of the environment to the United States of America to join the Chibok girls whose education he had sponsored in the US in 2014, in honor of her late father who had taken care of orphans of numerous pastors also killed in Maiduguri.

Emmanuel Ogebe said then “Zion’s feat is historic as the first victim of Boko Haram to earn a Bachelor of Science degree in America. More amazing is the fact that she did this despite undergoing surgery to her head.

“Boko Haram generally does not directly kill women. While I have seen male victims of gunshots to the head, she’s the first and only female victim I have seen with this type of experience. Yet from her amazing smile, you could never tell what horrors she’s been through.

“To overcome this and excel academically while adjusting to a foreign country showcases her resilience and is a true manifestation of the triumph of the human spirit over adversity.”

Interestingly Zion Umar who was Vice President of the Honors Society in her community college became a professor’s assistant in the university and was even grading examinations of first year students.

The university had offered her a postgraduate sponsorship and employment as a lecturer, but she declined due to her desire to pursue a medical-related course that would benefit others in the future.