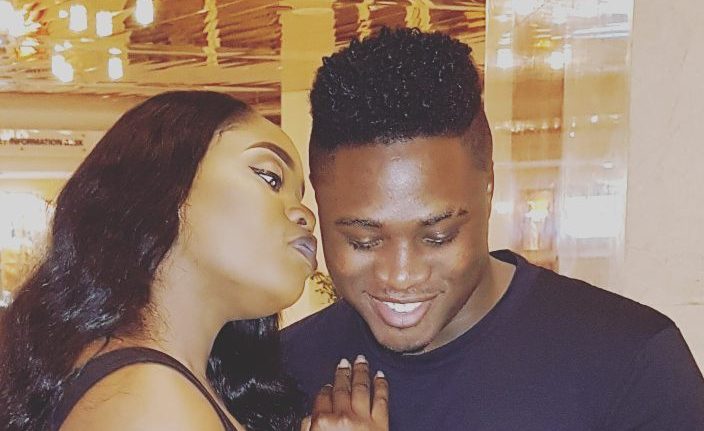 After publicly announcing her love for singer, Jeff Akoh, some 72 hours ago, Big Brother Naija star, Bisola Aiyeola, has declared it as publicity.
In a viral post on Saturday via Instagram, she wrote: “It’s official guys, Jeff Akoh and I are in love and in a strong, loving relationship. Your girl B is taken.”
With just three days to the album launch of Jeff Akoh, her Temple Music label mate, the talented actress cum musician has come out with clarifications.
Akoh, the 2015 winner of Project Fame West Africa, drops his debut 16 track, Lokoja, on his 21st birthday, on October 27.
Bisola posted a short video of Jeff Akoh singing, and added the message below: “Now that we have your attention.. Jeff’s album ‘Lokoja’ drops worldwide this Friday the 27th of October. He is not my boyfriend o (my eyes are still locked on Mr. Elba and if that fails I carry my load to MHQ to settle down with the Don) but he could be yours ladies! Boy is fine and has the most amazing vocals! Na play we dey play o! You know say #natheworkweywedeydo Go and preorder his album on all the digital platforms. For those who knew we were #uptosomething thank you for having faith I Love you. For those who have insulted us, make it up to us by buying/streaming/requesting his music when its out. You can also follow him @jeff_akoh. While you wait, keep enjoying Water & Fire, #Shokolokobangoshe & #Gbadun ft @teamsalut.
“Bloggers, oya, spread this gospel with the same rapid fire you used on Saturday. #TMC #TMPL #BeTheMovement #TakeMeToLokoja.
“#wearethemovement
“#lokoja.”